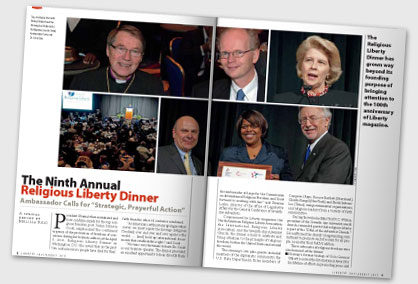 President Obama's then-nominated and now-confirmed pick for the top religious freedom post, Suzan Johnson Cook, emphasized the continued urgency of the protection of freedom of conscience during her keynote address at the April 5, 2011, Religious Liberty Dinner in Washington, D.C. She noted that in the past two centuries more people have died for their faith than the other 19 centuries combined.

"As Americans, without any apologies whatsoever, we must repeat the message [religious freedom] over and over and over again to the world . . . [and] hold up international documents that establish this right," said Cook.

"We were very fortunate to have Dr. Cook as our keynote speaker. The dinner provided an excellent opportunity to hear directly from the ambassador-at-large for the Commission on International Religious Freedom, and I look forward to working with her," said Dwayne Leslie, director of the office of Legislative Affairs for the General Conference of Seventh-day Adventists.

The evening's 200-plus guests included members of the diplomatic community; the U.S. State Department; three members of Congress (Reps. Roscoe Bartlett [Maryland], Charles Rangel [New York], and Sheila Jackson-Lee [Texas], nongovernmental organizations; and religious leaders from a variety of faith communities.
During his welcome Elder Ted N. C. Wilson, president of the Seventh-day Adventist world church, reminded guests that religious liberty is part of the "DNA of the Adventist Church." He reaffirmed the church's longstanding commitment to promote such freedom for all people, no matter their faith tradition.

Three advocates of religious freedom were also honored at the dinner:

Toward the end of the evening, Knox Thames, director of policy and research at the United States Commission on International Religious Freedom, gave a poignant tribute to the late Shahbaz Bhatti, a member of the Pakistani president's cabinet who was gunned down outside of his mother's home after speaking out against the country's controversial blasphemy laws. Thames was a personal friend of Bhatti's, and had helped him connect with Washington lawmakers during the Pakistani minister's recent trips to the nation's capital.

"He was ready to die for the cause of helping his country, but he didn't want to die," said Thames. "He squeezed every ounce out of being a religious freedom advocate on the federal cabinet before being murdered by the Pakistan Taliban."

Thames called for religious freedom advocates to put pressure on the U.S. government to keep the issue of reforming Pakistan's blasphemy laws on the "front burner" of bilateral relations. Bhatti headed the committee to amend the laws at the time of his assassination.

"The Religious Liberty Dinner has grown way beyond its founding purpose of bringing attention to the 100th anniversary of Liberty magazine. It is now a premier religious liberty event for the Washington political elite, diplomatic community, and various religious representatives," said Liberty editor Lincoln Steed. "The partnering of these like-minded organizations has created something with invaluable outreach potential."

Melissa Reid is the associate editor of Liberty magazine.

Readers of Liberty should know that there is a close connection between Liberty Magazine and NARLA (North American Religious Liberty Association). Just before the Religious Liberty Dinner our NARLA board met and voted Melissa Reid in as new executive director of that membership-based religious liberty advocacy organization. This should prove an ideal partnership between the magazine and NARLA, as she continues as associate to Liberty editor Lincoln Steed, who is also vice-president of NARLA.