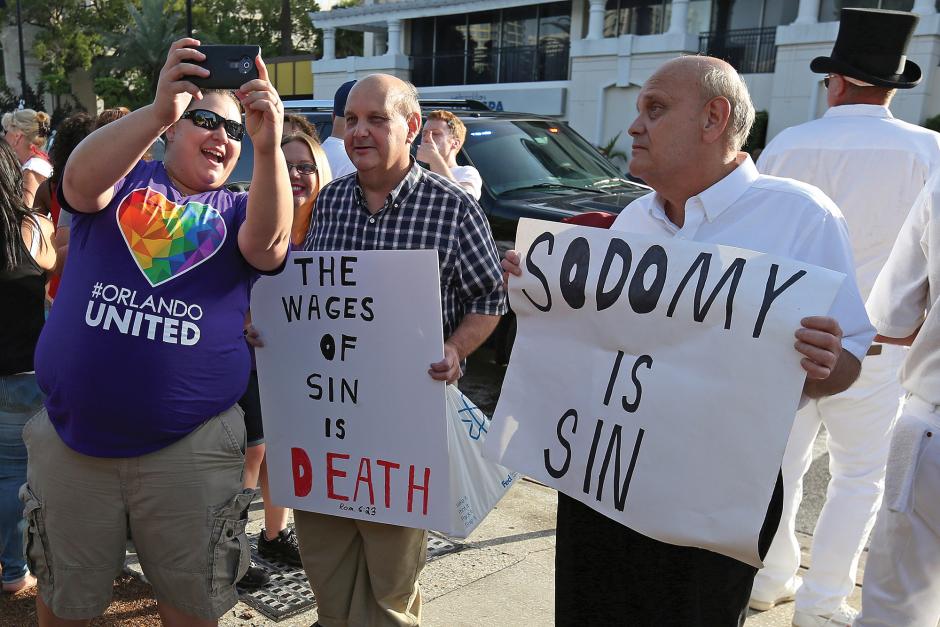 The mass shooting at a gay nightclub in Orlando, Florida, on the morning of June 12, 2016—the largest such massacre in U.S. history and the worst terror attack on U.S. soil since September 11—has unleashed a host of controversies relative to terrorism, immigration, hatred (whether taught or spoken)—and, by implication, religious liberty. What follows will confine its focus to the latter two issues.

It is likely fair to say that had the slaughter in Orlando occurred in any number of other settings—a shopping mall, a popular beach, a house of worship, a school, a workplace, or a different sort of nightclub—discussions of the tragedy and what should be done about it would nearly all gravitate toward issues of national security, the jihadist threat, Muslim immigrants, and gun control. But because the terror in Orlando was directed against a group, which, like Muslims, holds respective victim and pariah status on opposite sides of America’s great divide, the resulting national conversation has risen—and inflamed—other questions than simply those noted above.

Some in the wake of Orlando have opened a new attack on religious fundamentalism—be it Christian, Muslim, or Jewish—because of the stand religion takes regarding the immorality of homosexual practice.1 One article has noted that according to the FBI, more than 20 percent of the 5,479 hate crimes reported in the U.S. in 2015 were committed against LGBT persons.2 The article reminds us that “those crimes happened in a country where most of the homophobia is justified by citing Christianity, not Islam. But wave the Bible or wave the Koran, the common theme here is using religion as cover for vile bigotry.”3 A California congressman, a bit less bombastic, insisted that “it’s not about one religion who did this to LGBT people in Orland. It’s about a hatred toward LGBT people, and that hatred can come from a variety of places.”4

On the other end of the spectrum, certain ones have criticized many in the gay community for thinking “that Muslims, like gays, are an official victim group, and thus their natural allies.”5 One such author reminds his readers of the many brutal punishments prescribed by Islamic law for homosexuals—from stoning and throwing them off a high place to dropping a building on them6—and insists that Muslims moving to Western countries most likely retain these views.7 The author cites a report from the Netherlands indicating the erosion of tolerance for gays in that country because of the growth of Islam in such cities as Amsterdam,8 and cites similar reports from Norway and Great Britain indicating widespread support among Muslims in those lands for the harsh penalties prescribed by their faith tradition for homosexual conduct.9 (We note with interest, however, a 2015 Pew study showing 45 percent of American Muslims believing that homosexuality should be accepted by society, compared to 36 percent of Mormons and evangelical Christians.) 10

Other voices, less shrill perhaps, ascribe general blame for the horror, reminding us “this is the type of killing that could happen anywhere in America. The shooter could be Muslim, Jewish, Christian, Catholic, Hindu, or atheist, motivated by intolerance, religious zealotry, mental disorder, or simply blind rage.”11 I think of certain ones in my own religious community who, following the David Koresh/Branch Davidian episode in Waco, Texas, in 1993, attacked what they considered “fundamentalist” approaches to the Bible in general and its apocalyptic passages in particular as presumably bearing responsibility for the tragedy that took place. Such persons seemed not to remember that the principal drawing cards for Jim Jones’s Peoples Temple—with which comparisons to the Waco incident were often made—were such causes as civil rights, world peace, and social justice in general. Do such ideologies merit condemnation merely because a madman hijacks them for his own purposes?

But the broad-brush attack on “hatred” inspired by the Orlando shootings—especially as it relates to religious expression—is the primary focus of the present essay, and to this we now turn.

In 1991 an article titled “Thought Crimes” appeared in The New Republic, written by one Jonathan Rauch.12 Describing himself at one point as an “unrepentantly atheistic Jewish homosexual,”13 Rauch currently works as a contributing editor for National Journal andThe Atlantic, and is vice president of the Independent Gay Forum.14 He is the author of a number of books,15 including Gay Marriage: Why It Is Good for Gays, Good for Straights, and Good for America.16 Conservative author Peter Wehner has called Rauch “the most formidable and persuasive voice for same-sex marriage.” 17

But it was Rauch’s criticism of hate crimes laws in the above-mentioned New Republic article that vaulted him to national attention as an author on gay-related issues.18 Though written some years ago, the article is most insightful and merits thoughtful attention in today’s polarized, incendiary climate. Significant portions will be cited below.

Though acknowledging the rationale behind hate crimes laws, stating at one point that “throwing a swastika-emblazoned rock through a synagogue window is not the same as throwing any old rock through any old window,”19 Rauch poses two questions which address the basis of these laws—and then gives his answer:

He goes on to explain why, with a simple eloquence often missing in contemporary discussions:

“Hate-crimes activists argue that bias-motivated crime deserves special handling because it is especially harmful to society. But they have a hard time explaining why this is so. Why is it more terrorizing or socially destabilizing to stab someone because he’s Jewish, for instance, than to stab someone for his sneakers? The former signals that Jews are in danger; the latter signals that everyone is in danger. . . . Necessarily, if you say that assault motivated by bias is especially objectionable, you also say that assault not motivated by bias is less objectionable. Tying the fight against violence to other political agendas clutters and compromises what needs to be a clarion message: violence is intolerable, period.”21

“But different groups will have different ideas of what constitutes ‘prejudice.’ (Is secular humanism ‘prejudice’ against Christians? Is Afrocentrism prejudice against whites?) That is why eliminating prejudice is exactly what ‘the country’—meaning its governmental authorities—must not resolve to do. Not only is wiping out hate and bias impossible in principle, in practice ‘eliminating prejudice’—through force of law means eliminating all but one prejudice—that of whoever is most politically powerful.”22

He then writes: “Personally, being both Jewish and gay, I do not expect everybody to like me. I expect some people to hate me. I fully intend to hate those people back. I will criticize and excoriate them. But I will not hurt them, and I insist that they not hurt me. I want unequivocal, no-buts protection from violence and vandalism. But that’s enough. I do not want policemen and judges inspecting opinions.” 23

And finally: “As on campus, so in the courtroom: the best protection for minorities is not prejudice police but public criticism—genuine intellectual pluralism, in which bigots, too, have their say.” 24

Being a devout religionist myself, I’m sure Mr. Rauch and I hold varying opinions on many subjects. But the points he makes regarding efforts to criminalize hatred are spot-on and, in my view, unassailable.

First, like the attempt to eliminate prejudice, efforts to marginalize or even outlaw “hate speech” are an attempt at the impossible. All who hold strong convictions harbor hatred, regardless of the issue. Advocates of social injustice naturally despise what they consider to be injustice. Opponents of racial segregation, the Ku Klux Klan, and other expressions of ethnic hostility despise racism. Attacks on  economic inequality and the exploitation of the poor by the rich likewise involve hatred of certain ideologies and the practices they encourage. Hate speech, in other words, is ubiquitous in the interplay of ideas in a free country. And as Rauch says, to outlaw or forbid the airing of one form of hatred inevitably means embracing another—specifically that form of hatred held by whoever at the moment is making the rules.

We think of those who reject the construct held by many conservative Christians regarding homosexual practice—the need to love the sinner while hating the sin. When pressed, few if any—Christian or non-Christian, devout or irreligious—will dispute the broad outlines of this construct. Who among us, after all, doesn’t hate certain actions committed by persons we truly love—boyfriends, girlfriends, spouses, and children? Honest Christians, of course, are constrained to face the sad fact that too many who speak of loving the sinner while hating the sin tend to remember enthusiastically to do the one while giving notable neglect to the other. But for the purposes of the present discussion, the quarrel too many have with this construct is not with its basic truthfulness, but is rather rooted in their resistance to tolerating anyone who describes a cherished feeling or practice of theirs as wrong.

But this too, whether we like it or not, is part of free dialogue in a free society. As Rauch has rightly noted, violence and vandalism are not allowed, period. But the unfettered exchange of ideas—religious and otherwise—is quite another matter. And as Hendrik Hertzberg wrote many years ago regarding a different but related subject: “The First Amendment contains no requirement that the speech it protects be harmless. On the contrary, speech that somebody thinks is harmful is the only kind that needs protecting.” 25

I submit this applies as much to what some will call “hate speech” as to any other kind.

The Orlando tragedy sends the strongest signal yet to America’s warring factions that neither physical nor civil force is the rightful means for settling differences of religion and consensual morality. Nor can either side rightfully nurture the notion of a right not to be offended. Offense is part of the price of true liberty. And this applies both to the injunctions of conservative religion against homosexual practice and to those wishing to engage in these and similar consensual practices without legal curtailment. Those who resent and despise the belief that homosexual practice is sinful are not required in a free country to sit and listen to such discourses. And religious communities and their institutions who cherish orthodox teachings on sexuality cannot in a free country be forced to tailor their public statements, policies, and hiring practices toward accommodation of theoretical and lifestyle choices contrary to their faith.

In sum, civil concord and vigorous disagreement need not be mutually exclusive. Indeed, they are essential bedfellows in a political culture that holds liberty supreme. Neither violence nor vandalism need stem from strong convictions. The respective realms of persuasion and coercion, like church and state, must be kept strictly separate. If this proves in the end to be the ultimate lesson of Orlando, perhaps the blood spilled that awful night will not have been shed in vain.

1 Amanda Marcotte, “Orlando Mass Shooting: Bigotry Is Bigotry, No Matter What Religion You Use to Justify It” Salon, June 12, 2016, www.salon.com/2016/06/12/orlando_mass_shooting_bigotry_is_bigotry_no_matter_what_religion_you_use_to_justify_it/.

11 Michael A. Cohen, “All of Us Must Bear Responsibility for Orlando,” Boston Globe, June 12, 2016, https://www.bostonglobe.com/opinion/2016/06/12/all-must-bear-responsibility-for-orlando-mass-shooting/csr9NuKrN0zwylanjog2ML/story.html.

16 Jonathan Rauch, Gay Marriage: Why It Is Good for Gays, Good for Straights, and Good for America (Times Books, 2004).