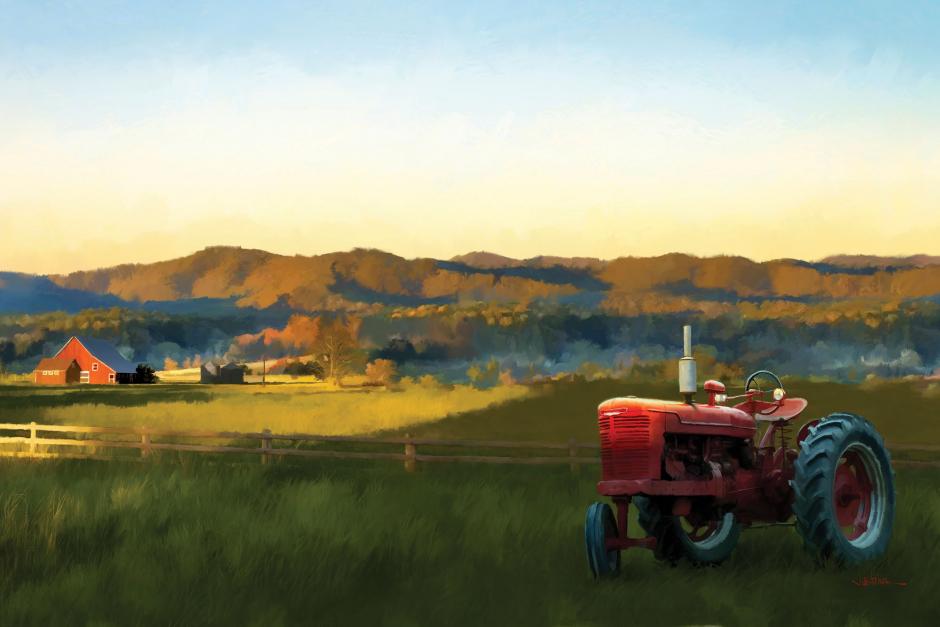 The Ox in My Yard

It looked kind of regal resting there by our privacy fence. The owner had done an amazing job of restoring it to its former glory. He’d overhauled the engine, replaced broken parts, and given it a beautiful paint job reflective of its original colors and design. I’d always thought old tractors look powerful and efficient, and this one certainly lived up to that description—except for one rather glaring flaw. Its left-front tire was missing; and for this reason it was “abandoned” in my front yard, waiting to be repaired.

It was on our property, not because of its beauty, but because of what it had been dragging behind it. Its large bush-hog attachment had taken an hour and a half to lay low a year’s worth of field growth: cutting down small bushes, chewing up brambles and weeds, and preparing the open areas across our West Virginia hillside for the cold months to come. But somewhere in all that mass of tangled vegetation and new growth was a small, pointed tree stump that had been sharp enough to penetrate a tractor tire. The driver, who’d bush-hogged my fields for many years, was just able to coax his beautifully restored creation up to our front yard and let it halt by the privacy fence.

The owner had no other way to get home, so I’d gladly driven him to his house, several miles away. The next day he returned in his truck, jacked up the tractor, and removed the tire. “I’ll be back later in the week to finish the job,” he promised.

But bad weather set in, and the week went by as rains fell and the tractor waited. By Friday it began to clear, and Saturday morning dawned bright and sunny.

Now, here’s where I need to tell you something significant about me. I’m a Seventh-day Adventist Christian. That means, among other things, that I keep the Bible Sabbath. That’s the seventh day of the week, according to the fourth commandment (Exodus 20:8-11). My calendar identifies this seventh day as Saturday; and God’s instructions to me are clear. “Six days you shall labor and do all your work,but the seventh day is a sabbath to the Lord your God. On it you shall not do any work, neither you, nor your son or daughter, nor your male or female servant, nor your animals, nor any foreigner residing in your towns” (verses 20:9, 10, NIV).*

Well, I figured the gentleman I’d hired to trim my fields was—for a couple hours each fall—my “male servant,”so I never asked him to work during what I consider to be God’s Sabbath hours. I’d told him this in the past, and he seemed OK with it.

That sunny Sabbath I went for a long walk along the verdant, early-fall country roads of my state—the ones John Denver used to sing about. As I was heading home, I met my bush-hogging friend driving his truck and pulling a trailer. “Tire’s changed,” he announced as he pulled up beside me. “Would you mind coming to get me when you get home?”

I presumed he wanted me to drive him from his house to my property so he could continue work on my yard on Sabbath. It didn’t sit right with me. I hesitated. “Any chance we could do this on Sunday or even Monday?” I asked. “The weather is supposed to hold.”

He frowned. “But I just finished cutting your fields,” he said. “You weren’t there, and I figured it would be OK. So now I need to get my tractor home for the other projects I have lined up.”

So there it was. My friend had finished cutting my fields because he saw no problem with earning a few extra bucks on a day I considered holy. That was totally up to him. I hadn’t ordered it or arranged for it to happen on that day, so my conscience was clear. But his beautiful tractor, with its newly repaired tire, still needed to get home for other projects, and he was asking for my help.

That’s when I thought of the words of Jesus, as recorded in Luke 14. Responding to critics who chastised Him for healing a man on the Sabbath, He told them, “If one of you has a child or an ox that falls into a well on the Sabbath day, will you not immediately pull it out?” (Luke 14:5, NIV).

Well, I had a large, mechanical ox in my front yard, and I was being asked to help my friend pull it out and send it home. This I quickly agreed to do.

As I was driving my van to pick up my friend, I got to thinking about the situation. Were there bigger issues at play here? We are not of the same faith. Our worldviews are dissimilar in several areas. But what if I want him to believe as I do? What if I could make hard-and-fast rules that would force him to observe my Bible Sabbath? Some well-meaning Christians promote just such a concept. They want their government to stand behind their Christian dogmas, saying that to make our country great once more, we need to add political punch to religious beliefs.

LAW OF THE LAND

As we rode from his house to mine, following the lovely curves and gentle ups and downs of our country roads, I turned to my friend and said, “Let me ask you something. This Sabbath thing that I’m so focused on? What if I could get enough people in Washington, D.C., to see things my way; to convince them that doing work on God’s holy Sabbath—work that could easily be accomplished on any other day of the week—not only goes against Bible teaching, but is a criminal activity? What if I could make the Sabbath doctrine the law of the land and have the power to dictate what you can and can’t do on Saturdays? Would you be OK with that?”

He thought for just a moment, and then shook his head. “No,” he said. “That wouldn’t be right.”

“Let me ask you another question,” I continued. “What if, because of my love for Scripture and the religion-based beliefs that shape my life, I could get enough people in Washington, D.C., to see things my way and make it illegal for you to have an abortion?”

My friend thought for a longer moment, then responded, “No, that wouldn’t be right either.”

“And,” I pressed, “what if, because of what Scripture says to me concerning how I’m supposed to live my life, I convinced lawmakers to ignore whatever civil rights you might have once had and require you to behave the way I practice my faith? Would that be OK?”

Again, my friend thought for a long moment. “No,” he said, “that wouldn’t be right either. Religion is personal.”

On that we could agree 100 percent. And on that concept we must hang our every belief and every dogma. Religious practice is personal, not corporate. Religious convictions must derive from personal conviction. We can test this concept each week when we faithfully sit in our pews at whatever church we attend. It’s almost guaranteed that how we internalize God’s Word varies from person to person. The man or woman sitting beside or across the aisle from us may have a very different take on how we are to live and in what ways we are to obey God.

Or look at the world in general. At last count, there were around 4,200 religions, and about a third of them were Christian. This group bases their beliefs on the very same Bible we hold in our hands as we march into church on whichever day we’re convinced is the Sabbath. Yet our religions can be strikingly different, promoting worldviews that vary greatly.

To those who desire to make adherence to religion-based principles the law of the land, the question must be addressed as to whose religion and which interpretation of doctrine is the one on which we should construct those laws. Yours? Mine? Some other guy’s? A TV preacher’s? A pious politician’s? How about that of the church with the most members or financial resources?And what if a law is built on a biblical interpretation that’s different from ours—such as what you can and can’t do on Saturday, the choices you’re allowed to make if you’re pregnant, and the value and limits we place on a human being based on his/her sexual preference?

The country in which I live—the United States of America—has done a pretty good job of keeping church and state separate. While many of its laws may reflect biblical principles incorporated into societal norms, many others don’t. Adultery isn’t illegal. Taking God’s name in vain doesn’t bend any national rules. Worshipping a god other than the God of heaven won’t land you in jail. Coveting a neighbor won’t summon the police force. Dishonoring your parents triggers no response from the FBI. Lying has become a national pastime, but it’s usually not a reason for arrest. Yet all of these are laws included in God’s Ten Commandments.

For those who identify as “Christian,” this disconnect between God’s laws and our nation’s laws should be good news because, if they were enforceable, we’d probably all be in jail. And those who don’t call themselves Christian are free to work out their own salvation without government intervention. Religion is, and always should be, personal.

As I watched my friend drive away on his skillfully restored antique tractor, I felt happiness deep in my heart. We are both Christians, yet on this day—this Sabbath day—I had been free to follow my heart, and so had he.