The Power to Change 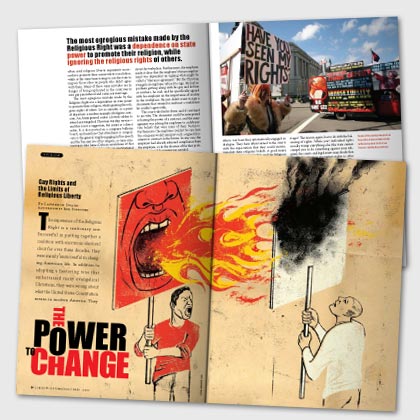 The experience of the Religious Right is a cautionary one. Successful in putting together a coalition with enormous electoral clout for over three decades, they were mainly unsuccessful in changing American life. In addition to adopting a hectoring tone that embarrassed many evangelical Christians, they were wrong about what the United States Constitution means in modern America. They often used religious liberty arguments incorrectly to promote their conservative social ideas, while at the same time trying to use the state to impose those ideas on people who didn’t agree with them. Many of these same mistakes are in danger of being replicated in the controversy over gay parenthood and same-sex marriage.

The most egregious mistake made by the Religious Right was a dependence on state power to promote their religion, while ignoring the religious rights of others. Let us consider, as a point of departure, a modern example of religious coercion. An Army general orders a Jewish soldier to attend an evangelical Christian worship service—and this is not a suggestion, but comes as a direct order. It is also posted on a company bulletin board, and mentions that attendance is compulsory. Is the general simply engaging in free speech and the free exercise of his religion, as some commentators like James Dobson would have it? Not at all—it is actually a blatantly unconstitutional attempt to use the command structure of the military to interfere with somebody else’s free exercise of religion. (It would be equally unconstitutional, of course, if an atheist officer ordered an evangelical soldier not to attend an evangelical worship service.) But this necessary balancing off of rights is something the Religious Right seems never to have quite understood. 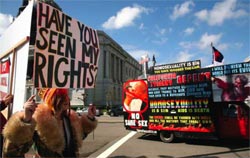 Or take the following case: a conservative evangelical posts a sign at his workplace with verses from Leviticus critical of homosexuals, positioned in such a way that everyone in the workplace can see them. A group of gay and lesbian employees asks the supervisor to take the sign down. The supervisor refuses, and the homosexual employees file a lawsuit. The gay workers prevail, because the judge rules that the only reason for displaying those particular verses was to single out co-workers on the basis of sexual orientation, and to some extent expose them to ridicule and humiliation. The right of the believer to display his Bible verses was trumped by the right of other employees to be free of a hostile work environment.

Another case, however, resulted in a victory for an evangelical employee. In this situation, a man was asked to sign a form by his employer agreeing to be tolerant of gays and lesbians. The objective, the employer said, was to ensure civility in the workplace. Furthermore, the employer made it clear that the employee’s future employment was dependent on signing what might be called a “tolerance agreement.” But the Christian evangelical employee refused to sign. He had no problem getting along with his gay and lesbian co-workers, he said, and he specifically agreed with his employer on the importance of civility in the workplace. He just didn’t want to sign a document that seemed to embrace a worldview he couldn’t agree with.

The court ruled in his favor, and it’s not hard to see why. The document could be interpreted as having the power of a contract, and the management was asking the employee to codify private beliefs that were none of their business. Furthermore, the employee couldn’t be sure how the company would interpret such a signed document or contract in the future. In any case, the employer had already achieved compliance from the employee, so in the absence of further problems no signed document was needed.

What makes these two seemingly disparate cases interesting is that while they both involve social advocacy, they also involved religious liberty. The first case is an example of freedom from religion (Bible verses used selectively to single out gay co-workers), whereas the second involved freedom for religion (in which management was prohibited from imposing a contract that contradicted the religious beliefs of its employee).

The principles involved in these cases reverberate in different guises throughout any discussion of gay rights. At the center of the controversy is the role of the state, and the way modern democracy works. There is a general consensus that pluralism doesn’t work without civility, and a grudging admission that yes, organized religion has at times singled out unpopular minorities. At the same time, there is also a growing consensus that laws or regulations against hate speech—like the heavy-handed “tolerance agreement” the employer wanted his worker to sign in the example above—don’t work. The culture wars have been a hard school for both evangelicals and secularists.

But since they see themselves as the embodiment of American virtue, some in the Religious Right have not always considered the rights of others, nor have they automatically engaged in dialogue. They have often turned to the courts with the expectation that they could institu­tionalize their religious beliefs. A good many Americans did not want that, and the Religious Right failed to fully realize their valid underlying concerns. Interestingly, the movement to limit abortion has now been taken up by secular women who promote sex education, new birth control methods, and secular moral arguments for responsible sexuality.

In states where there is no same-sex marriage, you can also campaign for or against it, depending on your position. But can you successfully petition the courts to stop same-sex marriages in those states that permit such marriages? The reason, again, has to do with the balancing of rights. While your individual rights usually trump everything else (the state cannot compel you to do something against your religion), the courts and legislatures may decide that the US Constitution guarantees rights to other people that have not been considered before. This is likely to happen where same-sex marriage is concerned. You cannot take away these new rights, in those states where they have come, but you can protect your own. And in states that do not have same-sex marriage, you can advocate against it, if you do not like it. But that is not religious liberty. That is social advocacy. 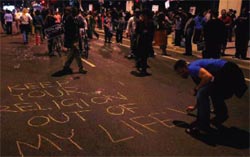 A man writes with chalk on Santa Monica Blvd. outside the Los Angeles California Temple of The Church of Jesus Christ of Latter-day Saints during a “No on Prop 8” march and rally protesting the Mormon Church’s support of Proposition 8. REUTERS/Danny Moloshok

This might be a good time for churches to consider how they approach social advocacy. It is at best a half truth, that marriage between a man and a woman is “under attack” by gays. Straight marriage is in trouble more because of the narcissism, materialism, and infidelities of straight people. Here’s another way to express this problem: of all the sins of our time, including torture, unnecessary war, and corporate exploitation, why should Christians concentrate on same-sex marriage as being especially deserving of condemnation? It is no less morally important if we also address these very real challenges.

Homophobia, of course, is not the disapproval of sexual acts between consenting adults, but an irrational and disproportionate hatred of those people who engage in them. Feelings about homosexuality are deeply intertwined with social attitudes. Anybody who knows anything about bullying knows that a large proportion of it is gay-baiting, but when confronted by evidence of violence against gays, some evangelicals denounce it as secular propaganda.

The social interests of Christianity, whether conservative or progressive, should be primarily based on arguments that are compelling enough to change society one person at a time. Although it may deal with the same issues, religious liberty is different, because it usually comes into play on an emergency basis to protect the individual or a minority, and is often a matter of legal precedent that must be considered against the claims of competing interests. To what extent is the core debate about same-sex marriage and artificial insemination a religious liberty issue? Not much, I’d say. Opposition to them is social advocacy, not to be confused with religious liberty, until it involves protection of individuals asked to do something that is unacceptable because of their religion.

It is sometimes difficult for those who live in sheltered religious communities and denominations to accept this, but religious, political and social pluralism works so well because it is larger, both demographically and ideologically, than they are—and therefore requires a degree of dialogue and negotiation that they’d never need in a less diverse society. To the Religious Right, the need for dialogue with people who weren’t exactly like them was confused with signs of social decline. But the need for dialogue can lead directly to the process of communication of ideas to others known as witnessing for one’s faith. Dialogue with people who are different from us is actually a democratic dynamo that drives much-needed social, political, and theological growth. As such we should welcome it.

This article addresses the very contentious issue of gay rights and gay marriage in a way that invokes the true principles of religious liberty. I know that by us including it some of our strongest supporters will be inclined to critique the moral moorings of Liberty. Let me say as directly as I can that the Biblical moral values I espouse, and that are held by my church—the Seventh-day Adventist Church—are incompatible with the gay lifestyle. One has to hold rather exotic views of biblical interpretation and be prepared to ignore the plainest of biblical statements to think otherwise.

But we need to remind ourselves that the biblical model of religious freedom is to allow people to “choose you this day whom you will serve,” and to recognize that there are natural consequences to all of our choices that God will not withhold from us. We need to recognize also that the civil model of religious freedom is to allow all belief and unbelief to coexist, without compulsion and restriction.

Of course people of differing moral viewpoints have a right, even an obligation to voice them—and, in a democracy particularly, an opportunity to insert them into the public discussion that may eventually change the public view. My church once participated in a broad-based temperance movement that sought to change public attitudes. Of course it was done from a point of moral advocacy not from a platform of religious liberty. Even today, in operating a department of Public Affairs and Religious Liberty, my church makes a distinction between what we call “Public Affairs”—or the concern of a religious entity to insert its viewpoint into society and to advance the church’s interests in the civil sphere—and the “Religious Liberty” component of its department title—this being the promotion of religious freedom for all, the protection of religious rights and the defense of a separation of church and state as being the best enabling model for true civil religious freedom. Editor.