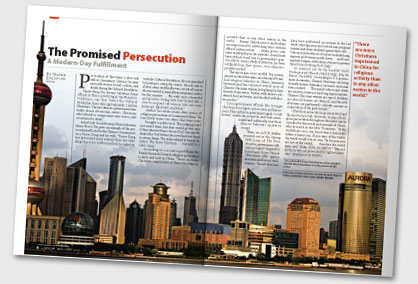 Persecution of Christians is alive and well in Communist China; it became especially vicious, brutal, sadistic, and deadly during the Cultural Revolution.

Check-Hung Yee, former Salvation Army official in China, now living in San Francisco, California, says that “before the Cultural Revolution, there were approximately 1 million Christians. The new atheistic government eventually closed all worship centers. Christians who refused to compromise were sent to jails or tortured to death.”

In his book Good Morning China (Salvation Army Press), Yee gives an example of the persecution inflicted by the Chinese Communists on a Pastor Dong and his wife. “Pastor Dong was persecuted more severely than any other clergy due to his stubborn refusal to cooperate with the Cultural Revolution. He was punished by having to sweep the streets. He was sent to a labor camp, and finally was cast out of society. He was viewed as mentally incompetent, useless for the country. . . . His wife, once a beautiful and gracious young lady, had turned into a slow-to-respond old woman. Her eyes were downcast, filled with much fear.”

Author Yee relates many other stories of religious persecution in Communist China. “In [one] little town, two other Christians were . . . brought to public trial. The judging panel instructed them that they would go free only if they admitted there was no God. One quickly denied his God before the crowd and was freed to return home. The other refused to betray the Savior. The brave Christian . . . was sent to a labor camp.”

According to a recent report from the Family Research Council, religious persecution is alive and well in China: “There are more Christians imprisoned in China for religious activity than in any other nation in the world. . . . Roman Catholic priests and bishops are imprisoned for celebrating Mass without official authorization. . . . Many priests who reject membership in the ‘patriotic’ church have been abducted and sent to government-sponsored labor camps. Medical attention has been withheld from these priests, even when desperately needed.”

The report goes on to say that “the systematic persecution threatens an estimated 70 million religious believers in China. Amnesty International has reported several cases of Chinese Christian women being hung by their thumbs from wires, beaten with heavy rods, denied food and water, and shocked with electric probes.”

Local government officials like to target Christians for religious persecution and harassment. They authorize government agents to raid homes, confiscate property, and indiscriminately and sadistically beat those Chinese believers unable to escape.

Then, too, as R. H. Mullen pointed out in the Spring 1995 issue of The First Freedom, government officials and agents targeted for harassment those Chinese Christians who oppose abortion and forced sterilizations: “Forced abortions have been performed on women in the last weeks of pregnancy, and several non-pregnant women have been sterilized against their will. . . . The reported methods of torture include hanging men and women upside down . . . and burning their tongues with electric batons to prevent them from invoking God’s help.”

As pointed out by the booklet God’s Underground Church (World Help, Box 50, Forest, VA 24551): “According to U.S. government documents, Chinese Christians are being brutally beaten, beheaded, tortured, and some even crushed. . . . Thousands who escape death are sold into slavery or face long imprisonment. Chinese Christian women are raped, children are abused, homes are burned, and forcible abortions are performed—all with consent or cooperation of the government.”

Often these persecutions go unreported and the injustice prevails. However, victims of religious persecution throughout the world can be consoled by the words and example of Christ, who declared in the New Testament: “If the world hates you, you know that it hated Me before it hated you. If you were of the world, the world would love its own. Yet because you are not of the world, . . . therefore the world hates you” (John 15:18, 19, NKJV).* “Blessed are those who are persecuted for righteousness’ sake” (Matthew 5:10, NKJV).

Haven Gow is a TV/radio commentator and writer who teaches religion to children at Sacred Heart Catholic Church, Greenville, Mississippi.