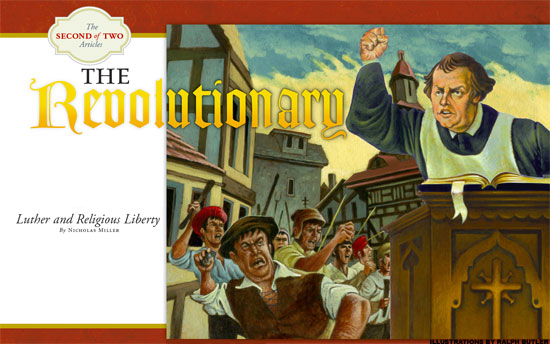 Scholars have long argued the extent of Luther's influence on the outbreak of revolution among the German peasants in 1524-1525. Those who would give him significant blame for it point to his intemperate remarks against institutional authority of the day, his arguments for spiritual equality, and his elevation of the individual conscience over spiritual and civil authorities. But others point to his 1522 opposition to the Zwickau Prophets and Andreas Karlstadt as an example of his early stands against populist movements that opposed or challenged civil authority by force.1 Indeed, it is hard to read Luther's writings between 1520 and 1525 and take seriously the view that he directly or indirectly promoted civil revolt.

On the contrary, Luther is more fairly accused of elevating the status of the prince at the expense of the church as well as the individual, at least in civil matters. His 1520 Address subordinates the church in civil matters. His 1523 discourse on the Secular Authority made clear that the civil sword was firmly in the hands of the civil magistrate, who was not to be actively opposed, even when overreaching and tyrannical. Even in religious matters, which he acknowledged were outside the civil ruler's legitimate oversight, he taught that spiritual "outrage is not to be resisted, but endured."2 Duly constituted civil rulers were not to resist their unjust and ungodly superiors.3 All this was written more than a year prior to the events directly leading to the Peasants' War. These events began unfolding in the summer of 1524 in southwest Germany.4 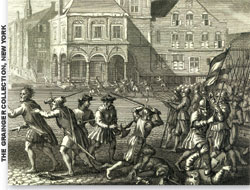 As the revolt spread, Luther wrote to clearly distinguish his reforms from the populist uprisings advocated by the peasants. In May of 1525 he released a tract aimed at both the rulers and the peasants, pointing out the excesses and abuses of both sides, and calling for restraint by the princes and submission by the peasants.5 He systematically outlined how the peasants' claims diverged from his gospel teachings. But he also insisted that the civil rulers should not punish the peasants for wrong beliefs, but only for sedition. "No ruler," Luther wrote, "ought to prevent anyone from teaching or believing what he pleases, whether gospel or lies. It is enough if he prevents the teaching of sedition and rebellion."6