The Right to Freedom of Expression

This surely was a tremendous victory for religious freedom; but, religious liberty suffered a major setback when the 9th Circuit Court of Appeals recently ruled that such words as "marriage" and "family values" constitute "hate speech" that would offend homosexual employees. The court's decision curtailed the free speech rights of Christian employees of Oakland, California, who sought to establish a "Good News Employee Association" that would provide a faith-based perspective on such issues as gay rights and abortion. Opponents of this organization of Christian employees said the religious employees were "homophobic."

As Texas Christian University professor of American religious history Mark Toulouse points out in God in Public (Westminster/John Knox), the Founding Fathers intended the establishment and free exercise clauses of the First Amendment to preserve and protect religion and religious liberty from transgressions by the state; they wanted the clauses to enhance religious expression in the public arena, not prohibit or discourage it.

In his book American Gospel, God, the Founding Fathers & the Making of a Nation (Random House), Newsweek managing editor Jon Meacham observes that the Founding Fathers wanted to separate Church from State but not religion from public life. Mr. Meacham points out that "Church and State are specific things: the former signifies institutions for believers to congregate and worship in the private sphere, the latter the collective milieu of civic and political and legal arrangements in which we live while in the public sphere." He adds: "The church is private religion. . . . The specific beliefs, practices and positions of any faith are protected from government interference by the First Amendment, which mandates religious freedom." At the same time, though, "the Founders consciously allowed a form of what Benjamin Franklin called 'public religion' to take root and flower (while) they were creating a republic that valued private religious liberty." 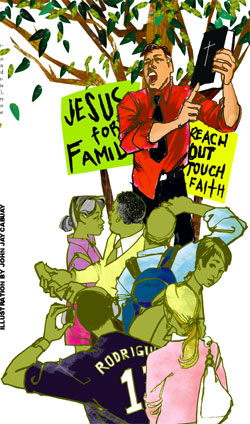 This view of the First Amendment clauses pertaining to religion is reflected in the U.S. Supreme Court's 1952 Zorach v. Clauson ruling. Speaking for the High Court, Justice William O. Douglas, well-known for his liberal judicial philosophy, said: "The First Amendment . . . does not say that in every and all respects there shall be separation of Church and State. . . . Otherwise, the state and religion would be aliens to each other—hostile, suspicious, and even unfriendly." He added: "We are a religious people whose institutions presuppose a Supreme Being."

Indeed, University of Chicago law professor Philip Hamburger, in Separation of Church and State (Harvard University Press), and political commentator M. Stanton Evans, in his book The Theme Is Freedom (Regnery), rightly insist that the Founding Fathers intended the First Amendment not to insulate society or the state from the influence of religion but, rather, to preserve and protect religion and religious freedom from transgressions by the state. They understood that a society's public morality depends upon a religious foundation, and that the wholesome influence of religion on private and public morality is essential to the survival of a free and civilized society; consequently, they wanted government to champion and defend religion and religious freedom.

Rabbi Walter Wurzburger tells us in his book God Is Proof Enough (Devora Publishing) that "it is imperative that the voice of religiously based moral values be heard. One of the worst features of modern secularization was the privatization of religious faith." Rabbi Wurzburger observes: "Even in a pluralistic society, religious individuals have an obligation to express their faith by advocating moral policies, which are inspired by their respective religious faiths." He says, "There is no reason why, for example, in the abortion debate, religious leaders whose moral positions are obviously related to or grounded in their religious values should not have the same rights as agnostics or atheists in the advocacy of their policies."

George Washington, for example, recognized that religion and morality are the two "great pillars of human happiness" and essential to "private and public felicity." John Adams observed that "our Constitution was made only for a moral and religious people." Thomas Jefferson asked, "Can the liberties of a nation be thought secure when we remove their only firm basis, a conviction in the minds of the people, that these liberties are a gift from God?"

Mr. Gow is a TV and radio commentator and writer who teaches religion to children at Sacred Heart Catholic Church, Greenville, Mississippi.

Liberty encourages any reexamination of the faith life of a nation and supports the right of religious expression by individuals throughout society. We are certain that the framers of the Constitution intended religion to flourish. But they consciously kept the state from endorsing or supporting any particular religious view. While the First Amendment separation of church and state has sometimes been zealously overapplied by secularists, it has protected the church from the state AND the state from unwanted control by the churches. And church-state separation has a clear and legitimate history. Some of the sources quoted here have a larger agenda, that is, more dismissive of the First Amendment. They rewrite history in convenient ways to justify a paradigm shift in church/state relations. We agree with many of their points but often question their methods and increasingly find their goals historically and constitutionally problematic. Editor.