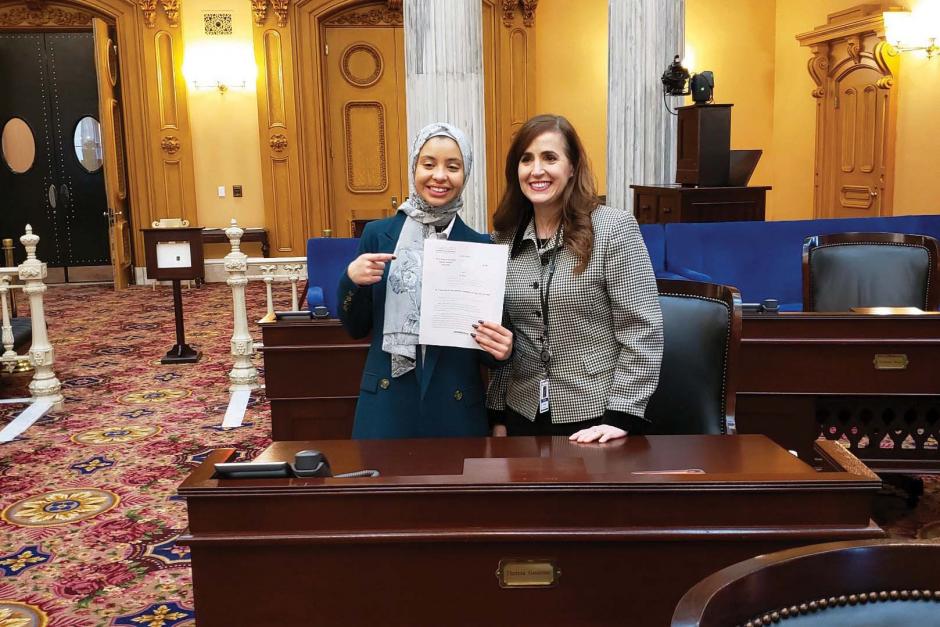 The Student and the Senator

They make an unlikely duo. A teenage “hijabi athlete” who is a devout Muslim with a passion for running. And an Ohio state senator, a self-described “hockey mom,” intent on making sure all student athletes, regardless of their faith tradition, enjoy equal religious freedom rights. Together they’re helping reshape how religious expression in sports is both perceived and protected.

Bettina Krause, editor of Liberty, talked with both Noor Abukaram and Senator Theresa Gavarone about their shared legislative quest.

As 15-year-old Noor crossed the finish line of her fastest 5K of the season (22 minutes 22 seconds) she had no idea that race officials had already disqualified her. Delighted with her time, Noor walked to the boards with her teammates to check her stats, but was surprised that her name was missing. Her coach had bad news. In previous races Noor’s choice to wear her hijab—a Muslim headscarf—while racing had been a nonissue. But too late, Noor’s coach found that the Division 1 Northwest District required paperwork submitted in advance requesting a waiver for her religious garb.

Noor’s experience that day became the genesis of her #LetNoorRun initiative (www.letnoorrun.com), which fights against discrimination in sports.

Bettina Krause: Noor, the day of the race, as you began to absorb the fact that you’d been disqualified because of your hijab, can you remember what was going through your mind?

Noor Abukaram: I was in disbelief. I didn’t really understand what was going on. Actually, at first I thought they were joking, because I’ve been an athlete my whole life and this kind of thing had never happened to me. I’d heard about it happening to others, but it had never happened to me. Honestly, I was really embarrassed. You can imagine—this was two years ago, so I was 15 at the time. I didn’t want to go home on the bus, so I called my mom, and she came and picked me up.

Krause: It seems like the easiest thing would have been to try to put the whole incident behind you. To simply say to yourself, “OK, I’m going to make sure my coach applies for that waiver for future races.” But you didn’t. Why?

Abukaram: I remember talking to my older sister, and she reminded me that my younger sister’s journey in athletics was just beginning; that she will be the next hijabi athlete in the hijabi household. Just the thought that something like this may happen to her next was enough reason for me to decide to go out and tell my story.

It wasn’t something I wanted to do. I really just wanted to hide in my room and cry. I was quickly reminded, though, that it really wasn’t about me. I was going to fight this fight for everybody. For the younger generation.

Krause: So very soon afterward you started the “#LetNoorRun” initiative. What happened then? What were you hoping to achieve?

Abukaram: The incident was in October of 2019, and we started #LetNoorRun in January 2020. At first what I really wanted to achieve was to bring together different stories of hijabi athletes like Bilqis Abdul-Qaadir and Amaiya Zafar, because we’d all had similar experiences.* To me, it was important for people to see that it’s not just a “once-in-a-blue-moon” kind of thing; it happens all the time to hijabi athletes.

Krause: What would you say to someone who asked, “Why can’t you just not wear the hijab while racing? Take it off and then put it straight back on after the race.”

Abukaram: Well, you have to really understand why we wear the hijab. It’s not like a cosmetic thing, you know. It’s a religious thing and something that is prescribed to us from God. It would be like someone asking me to take off my nose. It’s a part of me. I started wearing hijab in 2015. Before I even started wearing it, it’s something I wanted to do because my mom wears the hijab. My grandma wears the hijab. My aunts wear the hijab. I never saw it as something that’s going to get in the way of anything.

Abukaram: I remember telling Senator Theresa Gavarone about my story, and she just couldn’t understand why it should have happened. We had both seen players or runners wearing cross necklaces all the time. And when I was talking with Bilqis about her situation with the FIBA (International Basketball Federation), she didn’t understand, because some basketball players wear these huge tattoos of Bible scriptures. So it’s just really a matter of making sure that everyone can experience the same sort of religious freedom.

Krause: Speaking of the senator, how did you two connect?

Abukaram: We had coffee back in January—the same day that I had my first #LetNoorRun event. And honestly, I didn’t expect anything from it. I just expected to meet with her. It was cool! I dressed up, and we took a couple pictures. But then we actually got to talking. Immediately she took out her iPad and started taking notes. She got to work on it immediately, and that’s something we didn’t expect. That same night—like I said, it was the day of my event, and my lawyer was there—my lawyer said to me, “You won’t believe it. Senator Gavarone called me and we’re going to be working on something amazing.” Then a few weeks later the senator called my mom and told us about the Ohio Senate Bill 181.

Krause: I’ve seen photos of you at the Statehouse and testifying before the senate committee. What has it been like for you being involved in this process?

Abukaram: It’s one of the most real experiences that has come from telling my story. I have no idea how many interviews I’ve done, but it wasn’t until I spoke with Senator Theresa and went to Columbus to testify and saw this bill coming to life that I realized why I did all those interviews. It was so people like Senator Theresa could hear my story!

Krause: You’ve recently started college—I’m wondering if your experience has influenced your choices. Is it changing your direction in life at all?

Abukaram: The #LetNoorRun initiative is something I plan to do forever. So when I was deciding what to study at the university, it was definitely “What can I study that can help me with this initiative?” I also have a passion for fashion design, so I’m going to be studying that and learning a lot about brand marketing, which I think will help with #LetNoorRun. Then I plan on going to law school, which is something heavily influenced by this journey of mine.

Krause: You mentioned right at the start of this interview that one of the motivations for you in standing up and taking on this fight was to speak for the next generation. What do you hope the next generation of Muslim women in America will experience?

In May this year Ohio state senator Theresa Gavarone introduced S.B. 181, a bill to protect student religious expression in athletics. In June the senate passed the bill unanimously. An earlier iteration of the bill had been passed in the senate last year, but its progress in the house was stalled as COVID-19 disrupted the legislative schedule.

As of publication, the current bill was progressing through the house and on track to become law.

Bettina Krause: Senator Gavarone, I’m intrigued to know how and why you came to team up with Noor on this issue of religious expression in athletics.

Senator Theresa Gavarone: An article came across my desk about a student who had been disqualified for wearing her hijab while running in a race, and I wanted to get more information. The family lives in my district—the second Senate district in Ohio—and so I reached out and had a meeting with Noor and her mother. We sat down and Noor began to tell me her story and, honestly, it lit a fire. I’m a mother of a student athlete. My son, when he was in high school, played hockey and lacrosse, and his senior year he also played football. And you know just how hard these athletes train to compete at their best level. No student athlete should ever be forced to choose between exercising their deeply held religious beliefs and participating in high school athletics. It just shouldn’t happen.

Krause: It sounds like you had an almost visceral reaction to the situation—you could envision how it would feel for it to happen to your child.

Gavarone: I’m a hockey mom. That inner hockey mom in me said, “This is not happening to a high school athlete!”

I’m beyond impressed with Noor. She’s a fighter. She’s really standing up for student athletes across the state, and that says a lot about her character. She’s passionate, well spoken, and very composed. She has come down and testified in the senate committee twice. She was there when the legislation was introduced, and she was there when it passed on the senate floor.

Krause: What sort of considerations did you have to balance in drafting this legislation?

Gavarone: Well, the process in the legislature has been pretty smooth. Some people had concerns about safety issues, and we want to be very sure our student athletes are safe. We have language in the bill addressing those concerns. If something poses a safety hazard, reasonable accommodations can be made.

But it is incredible how this issue has brought people and communities together: the Christian, Muslim, and Jewish communities were all very supportive. And both Democrats and Republicans came together and passed the bill unanimously in the senate.

Krause: One of the reasons this story really stood out for me was the fact that Noor was able to engage in the political process to make change, and you facilitated that. It really was this partnership between a teenage citizen and a lawmaker, and I loved that. For you, personally, what does this sort of partnership mean to you?

Gavarone: You know, it means a lot. As a legislator, I can tell you that most of my legislation comes from people in my community, people I serve, constituents. And just seeing Noor’s story in the paper and having a meeting with her and hearing her story, those are the kinds of situations that really drive me in the legislature. You know if this happened here, then it’s happening all over the state—individuals taking an adverse situation and turning it into something positive. Making it a catalyst for change. And that’s powerful.

* Bilqis Abdul-Qaadir is a former University of Memphis basketball player, and Amaiya Zafar was the first boxer to wear a hijab in a sanctioned fight. Both women have battled discrimination for their choice to wear Muslim headgear and clothing while competing.