The Ten Commandments in the Courts

Marc D. Stern May/June 2005
"The pre-eminent purpose for posting the Ten Commandments on schoolroom walls is plainly religious in nature. The Ten Commandments are undeniably a sacred text in the Jewish and Christian faiths, and no legislative recitation of a supposed secular purpose can blind us to that fact. The Commandments do not confine themselves to arguably secular matters, such as honoring one's parents, killing or murder, adultery, stealing, false witness, and covetousness. . . . Rather, the first part of the Commandments concerns the religious duties of believers: worshipping the Lord God alone, avoiding idolatry, not using the Lord's name in vain, and observing the Sabbath Day" (Stone v. Graham, 1980).

Justice Rehnquist, as he then was, dissented: "The Establishment Clause does not require that the public sector be insulated from all things which may have a religious significance or origin. This Court has recognized that 'religion has been closely identified with our history and government,' . . . and that '[t]he history of man is inseparable from the history of religion'" (ibid., citations omitted).

Anyone (including this writer) who predicted that this rather commonsensical ruling would be conclusive was a false prophet. Ten Commandments litigation has become a growth industry for lawyers specializing in the First Amendment. Dozens of lawsuits have been filed over the past five years challenging Ten Commandments displays by government or by private parties given special access to government land. Purely private displays are, of course, not affected by this litigation. Two of these cases-Van Orden v. Perry (Texas) and McCreary County v. ACLU (Kentucky)-have come before the United States Supreme Court. Decisions will come by June 2005.

Although the burst of litigation is relatively new, the displays may not be. Many of the Ten Commandments displays are almost 50 years old, but are now challenged for the first time. There is also a spurt of new Ten Commandments displays, including one involving an Alabama judge who has embroidered them on his judicial robes. The most notorious new display case involved a deliberately provocative 5,000-pound granite monument placed in the Alabama Supreme Court building by former Alabama Supreme Court chief justice Roy Moore. A federal court ordered it moved. The chief justice refused. It was removed anyway. The display and its removal may be serving as a springboard for Moore's political ambitions.

It would be hard to say that these challenges are a result of a sudden upsurge in violations of the Ten Commandments themselves, and that the displays are being challenged as unwelcome reminders that people are sinners. The murder rate keeps dropping. It is doubtful that adultery is more common now than it was 20 or 40 years ago. With the exception of small groups of Jewish and Christian believers, the Sabbath is no more scrupulously observed today than at any time during the past 50 years.

Texas and the Commandments-Van Orden v. Perry
Just before the 1956 release of his remake of The Ten Commandments, fabled movie producer Cecil B. DeMille learned that a Minnesota juvenile judge and the Fraternal Order of Eagles had joined to erect Ten Commandments monuments in public places. The judge believed that the teenagers he saw in his courtroom lacked any idea of right and wrong. Exposure to the commandments, he believed, would set such teens straight.

The Eagles joined with the judge only after persuading themselves that despite having picked the Lutheran version of the commandments-which differs both in numbering and interpretation from the version of the commandments adopted by the Jewish, Catholic, and other Christian traditions-the display would be nonsectarian. (Jews, for example, count "I am the Lord" as the first commandment; the monument treats that verse as a prologue and omits the phrase "which have brought thee out of the land of Egypt.") DeMille saw an opportunity to help promote his movie. Over the next few years he helped pay for literally thousands of these displays.

The monument's presence at the Capitol went unchallenged until a nonpracticing lawyer, Thomas Van Orden, alleged that by displaying the commandments in this fashion the state was improperly "promoting the Commandments as a personal code of conduct." He argued that the reasonable observer would see the display as favoring the Jewish and Christian faiths over others and over atheism.

The United States District Court for the Western District of Texas and the United States Court of Appeals for the Fifth Circuit agreed with Texas. The appellate court accepted Texas' claim that the monument celebrated the commandments' influence on American law, but that "to say this is not to diminish the reality that it is a sacred text to many, for it is also a powerful teacher of ethics, of wise counsel urging a regiment of just governance among free people. The power of that counsel is evidenced by its expression in the civil and criminal laws of the free world. No judicial decree can erase that history and its continuing influence on our laws-there is no escape from its secular and religious character. There is no constitutional right to be free of government endorsement of its own laws."

The appellate court did not explain how, for example, the commandment against idolatry influences secular law.

The Kentucky Case- McCreary County v. ACLU
The Kentucky Ten Commandments monument is more recent, and its history more complex, than its Texas counterpart. The case before the Supreme Court was one of three consolidated in the lower courts, each challenging a display of the commandments in a different Kentucky county. The one the Court is reviewing is one of two involving courthouse displays. The third case involved a school display. (Although the school board sought Supreme Court review of a part of the decision adverse to its display, the Court has so far pointedly refused to act on that request.) 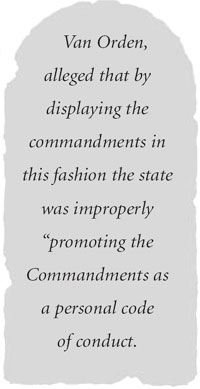 The display in McCreary County began only with a framed copy of the Ten Commandments. (The Court does not explain which version was used.) When the ACLU filed suit challenging the display, the county quickly posted a potpourri of equally sized documents around it, which, like reindeer and Santa Claus around a municipal cr