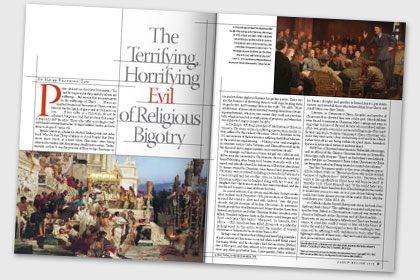 Peter declares in the New Testament: “Do not be surprised at the painful trial you are suffering…. But rejoice that you participate in the sufferings of Christ. . . . If you are insulted because of the name of Christ, you are blessed, for the Spirit of glory and of God rests on you. . . . If you suffer as a Christian, do not be ashamed, but praise God that you bear that name” (1 Peter 4:12-16).* He adds: “Those who suffer according to God’s will should commit themselves to their faithful Creator and continue to do good” (verse 19).

British Christian scholar Dr. Melvin Tinker points out in his book Why Do Bad Things Happen to Good People? that Peter wrote those words at a time when Christians were being subjected to violent, life-threatening, deadly persecution. Tinker reminds us that “it was the practice of Nero to dip Christians in tar and set them alight to illumine his garden parties. There was also the business of throwing them to wild dogs, heating them on grid irons, and burning them at the stake.” He adds: “More subtle forms of persecution involved barring them from obtaining employment, which in turn meant they could not pay their bills, which in turn led to confiscation of property, and when that was exhausted, imprisonment for debt.”

According to Jeff King, president of International Christian Concern, Christians today are suffering a persecution similar to that suffered by the earliest Christians: “Most Christians in the U.S. are unaware of the horrendous suffering that fellow believers in the world are experiencing. . . . Native pastors and evangelists in countries such as Cuba, Vietnam, and China often work under the threat of arrest, imprisonment, and sometimes death.”

For example, in Pakistan a 9-year-old girl was called an infidel because she converted to Christianity; she was abducted and found bleeding after being tied, beaten viciously with a bat, raped, and sexually abused. In Indonesia, a Christian church and 20 homes owned by Christians were burned and destroyed; 12 Christians were murdered, including a 9-month-old baby and a 3-year-old girl and her mother. Also, in Indonesia, a young Christian mother was kidnapped along with her 10-year-old daughter. Her Christian son and in-laws were murdered, and she was forced to marry a man and have his baby. 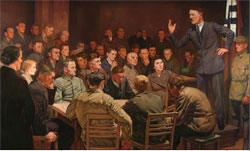 In this painting entitled In the Beginning Was the Word, Hermann Otto Hoyer, ca. 1937, a quasi-messianic Hitler is depicted mesmerizing an audience with his oratory.

As social activists Kay Strom and Michele Rickett make clear in their book Forgotten Girls, persecution of Christians around the world is alive and well. Indeed, “over the past decade, the persecution of Indian Christians by extremist Hindu groups has steadily increased. Many churches have been burned, and pastors and other Christian leaders attacked, even killed. Terrified believers hide in the forests until hunger and thirst overcome their terror.” Moreover, “in Somalia, East Africa . . . Christians have been killed, driven out, or pushed far underground. In the entire world, the number of Somali Christians is believed to be no more than 2,000.”
Perhaps one of the most horrifying and terrifying examples of persecution of Christians occurred when Adolf Hitler ruled Germany. Hitler and his disciples had elevated him (Hitler) into a false god, and they refused to let anyone acknowledge/serve any other god before him. Consequently, Hitler ordered his fanatic disciples and apostles to hound, harass, persecute, torture, and even kill those who believed that Jesus Christ, not Adolf Hitler, was their Savior.

Likewise, in Communist China, disciples and apostles of Chairman Mao elevated him into a false god. Schoolchildren were forced to memorize Chairman Mao’s sayings and even to sing songs in praise of the mad dictator who murdered millions of his own people, even in his paranoia killing many of his most fervent supporters. Today in Communist China, Christians who insist they must serve, obey, and worship God and Jesus Christ rather than Mao are being ruthlessly spied upon, hounded, harassed, persecuted, tortured, and murdered.

Bobby Jue, a Christian businessman in Hollandale, Mississippi, and an official of the Chinese Christian Mission in Greenville, Mississippi, sadly observes: “There’s no doubt there’s very little religious freedom in Communist China today. Christians in China are being persecuted and being treated as second-class citizens.”
The New Testament speaks to this issue of religious persecution; indeed, it tells us: “Blessed are those who are persecuted because of righteousness” (Matthew 5:10). “Everyone who wants to live a godly life in Christ Jesus will be persecuted” (2 Timothy 3:12). Christ Himself said: “If the world hates you, keep in mind that it hated me first. If you belonged to the world, it would love you as its own. As it is, you do not belong to the world, but I have chosen you out of the world. That is why the world hates you” (John 15:18, 19).

As Catholic scholar Russell Shaw points out in his book Does Suffering Make Sense? “The suffering associated with persecution has been linked to Christianity in a special way, viewed as a kind of hallmark of the Christian and of Christian life. . . . Those who set out resolutely to follow Jesus Christ are bound, it seems, to come into conflict sooner or later with the forces of evil in the world; if they respond as Jesus did—seeking to overcome evil by suffering it with confidence in God, rather than fighting it with evil of their own—they are bound also to experience persecution in some form.”

Haven Bradford Gow is a television and radio commentator and writer who teaches religion to  children at Sacred Heart Catholic Church, Greenville, Mississippi.