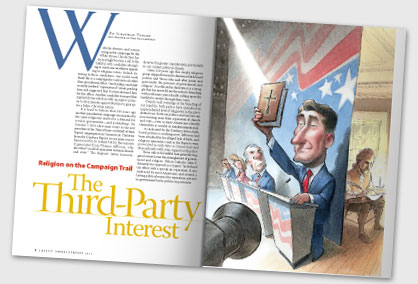 With the rhetoric and rancor rising in the campaign for the White House, the election has increasingly become a call to the faithful, with candidates attempting to outdo one another in appealing to religious voters. Indeed, listening to these candidates, one could easily think this is a campaign for ecclesiastical rather than presidential office. One leading candidate recently invoked "supernatural" events guiding him and suggested that God predestined him for this office. Another candidate trumped that implied divine selection with an express promise to discriminate against Muslims to guarantee a Judeo-Christian nation.

It is hard to believe that 210 years ago another presidential campaign was marked by the same religiosity and led to a demand for secular government—and politicking. On October 7, 1801, three men wrote to the new president of the United States on behalf of their Baptist congregation in Connecticut. The letter from the Danbury Baptist Association is most famous not for its content but for the response it generated from Thomas Jefferson, who described "a wall of separation between church and state." The Baptists' letter, however, deserves far greater consideration, particularly in our current political climate.

Some 210 years ago this deeply religious group stepped forward to denounce faith-based politics and "those who seek after power and gain under the pretense of government and religion." As reflected in the letter, it is a struggle that has existed from the nation's founding, with politicians periodically calling upon the faithful to testify through their votes.

Despite such warnings at the founding of our republic, both parties have unleashed an unprecedented level of religiosity in the presidential race. Both our politics and our laws are now moving away from separation of church and state—even as more Americans identify themselves as secular or nondenominational.

As indicated by the Danbury letter, faith-based politics is nothing new. Jefferson had been attacked for his alleged lack of faith, and religious minorities such as the Baptists were persecuted in such states as Connecticut and Massachusetts with state-supported churches.

Those calls to be faithful have generally triggered concern over the entanglement of government and religion. When Catholic John F. Kennedy was opposed as a "papist," he defused the effort with a speech on separation. It was embraced by most Americans and created a lasting political respect for separation, not just in government but in politics in particular.

Much of that changed, however, with George W. Bush and his use of faith-based politics. Now, religious and even sectarian pitches have become commonplace and expected. The fears of the Danbury Baptists appear to have been realized, with politcal campaigns, federal programs, and judicial decisions moving away from a clear separation of church and state.

It is now expected that candidates will offer accounts of personal salvation and implied divine guidance. At a speech in mid-September at Jerry Falwell's Liberty University, for instance, Texas governor Rick Perry spoke of his "faith journey" and told students to "trust that God wouldn't have put you here unless He had a unique plan for your life." Only days before I write this, Perry extended a call for people to pray for President Obama and ask God "to give him wisdom, to open his eyes" to save the country.

Candidate Newt Gingrich set out to claim his share of the faithful by attacking the faithless. In a speech in March he promised to protect America from atheists, secularists, and, incongruously, Muslims: "I am convinced that if we do not decisively win the struggle over the nature of America . . . [my grandchildren] will be in a secular atheist country, potentially one dominated by radical Islamists and with no understanding of what it once meant to be an American."

Meanwhile, former Senator Rick Santorum and Representative Michele Bachmann have spoken out against the very notion of separation of church and state. Bachmann told a large youth ministry group a few years ago that religion is supposed to be part of government: "[Public schools are] teaching children that there is separation of church and state, and I am here to tell you that it's a myth. That's not true." Santorum has recounted how, as a Catholic, he was "appalled" by Kennedy's "radical" statement that he believed in a wall of separation.

Mitt Romney, as a candidate on the national stage, has had to thread the needle of appealing to the Religious Right while avoiding a backlash over his Mormon faith. The result has been some awkward moments for the former Massachusetts governor, including a speech during his 2008 campaign in which he assured voters that "I believe that Jesus Christ is the Son of God and the Savior of mankind."

In the 2008 race Democrats moved to reclaim religious voters by adopting religious rhetoric and theopolitical policies. Churchgoers had represented 41 percent of the electorate in 2004, and 61 percent of them voted for Bush. Obama set out to change that percentage in favor of his own party and enthusiastically embraced faith-based politics. He proclaimed his intention to be "an instrument of God" and to create "a kingdom right here on earth." Even the title of his book The Audacity of Hope was taken from sermons by his controversial spiritual adviser, the Reverend Jeremiah Wright, Jr.

Like his Republican counterparts, Obama has denounced secularists—and, implicitly, their view of complete separation of church and state. He has chastised people who object to the religiosity that has become the norm in American politics. "Secularists," he once insisted, "are wrong when they ask believers to leave their religion at the door before entering into the public square."

After taking office, Obama expanded the scope of Bush's controversial faith-based programs. At his inauguration he attempted to appeal to conservative religious voters by asking minister Rick Warren to give the invocation. Warren's book The Purpose Driven Life seemed perfect for Obama's faith-infused, purpose-driven politics.

This is all a far cry from Jefferson, who refused to issue Thanksgiving Day proclamations because he thought it would violate the establishment clause. Later Andrew Jackson also declined to declare days of Thanksgiving or fasting out of the same concern. The 1797 Treaty of Tripoli, signed by John Adams and approved by George Washington and the Senate, included a statement that "the government of the United States of America is not, in any sense, founded on the Christian religion."

It is doubtful that Washington and Adams, let alone Jefferson, would fare well today espousing such sentiments. Indeed, Tea Party favorite Sarah Palin has said that "hearing any leader declare that America isn't a Christian nation" is positively "mind-boggling."

In today's theopolitical world it is hard to see where God ends and Mammon begins. For example, in the summer of 2011 Perry was asked not just whether he prayed but what he prayed for. "Easy," the governor responded. He asks God to guide Obama to "turn back the health-care law" and to "ask that his EPA back down these regulations that are causing businesses to hesitate to spend money." While some may find it difficult to imagine praying for pollution, that misses the point. The key for Perry was to erase the distinction between prayer and politics.

Emphasizing religion in politics tends to deemphasize the responsibility of politicians for their decisions. Last spring Perry was facing a devastating drought, state-wide wildfires, and criticism that Texas had underfunded firefighting units. He issued an official order proclaiming three "days of prayer for rain in the state of Texas." Last month his campaign cochair explained that wildfires and floods were really God's punishment for being soft on homosexuality.

In this climate it is remarkable to read the letter of the Danbury Baptists, warning that "it is not to be wondered at therefore; if those who seek after power and gain under the pretense of government and religion should reproach their fellow men—should reproach their order magistrate, as an enemy of religion, law, and good order."

One problem with mixing religion and politics is that it quickly becomes a competition for demonstrating fealty to the faith, including promises of favoritism for mainstream religions or, conversely, discrimination against minorities. Republican presidential candidate Herman Cain has spoken of not wanting Americans "to lose our Judeo-Christian identity" and said earlier this year that he would not be comfortable appointing Muslims to his Cabinet—a position he later withdrew and apologized for after meeting with Muslim leaders.

Despite polls showing that 66 percent of Americans support "a clear separation of church and state," those Americans do not seem to be motivating politicians or shaping politics. Indeed, Democratic strategists believe that secularists have nowhere to turn—which means Obama can court religious voters without fear of losing others' support. The result is that the 34 percent who do not support separation seem to drive the political agenda.
The danger of explicit appeals to faith in politics isn't the establishment of an official religion; that remains highly unlikely. Rather, faith-based politics can become faith-based laws that enforce morality codes, expand public subsidies for religious institutions, or sideline religious (or nonreligious) minorities. Most important, our political-religious climate threatens to replace a campaign for the best policies with a contest of the most pious.

As our politicians move away from separation principles, the courts inevitably follow suit. We now appear to have (or be close to having) a majority of antiseparation Supreme Court justices who favor a type of state-supported monotheism. Justice Antonin Scalia wrote in a 2005 dissent that there is a clear majority on the Court that opposes "the demonstrably false principle that the government cannot favor religion over irreligion." He noted that "the three most popular religions in the United States, Christianity, Judaism, and Islam—which combined account for 97.7 percent of all believers—are monotheistic."

Even as the world recoils from the extremism of religious-based groups and political systems in places such as Iran and Pakistan, the United States is gradually erasing the bright line that has existed for decades between religion and government. While religious instability and strife in countries around the globe should reinforce the values of separation and the message of the Danbury Baptists, instead politicians are selling themselves as the Judeo-Christian answer to a troubled world; confident, as Perry put it recently, that "He has me here at a time such as this."

Separation is not a principle that just protected the faithless as the letter of the Danbury Baptists demonstrates. It protects all of us whether religious or nonreligious. Indeed, government entanglement with faith tends to reduce moral precepts to political sound bites and bring religion down to the level of a pushpoll.

To put it simply, religion is back in politics. While the targeted religious minorities may have changed from Baptists to Muslims, the fight over separation has resumed with the same politicized piety that once tore this country apart. The question is whether there remains sufficient faith in secular government to rebuild a wall that has long protected us from ourselves.

Jonathan Turley is the Shapiro professor of public interest law at George Washington University. He has shared his concern through similar articles on the Internet and in the Washington Post.