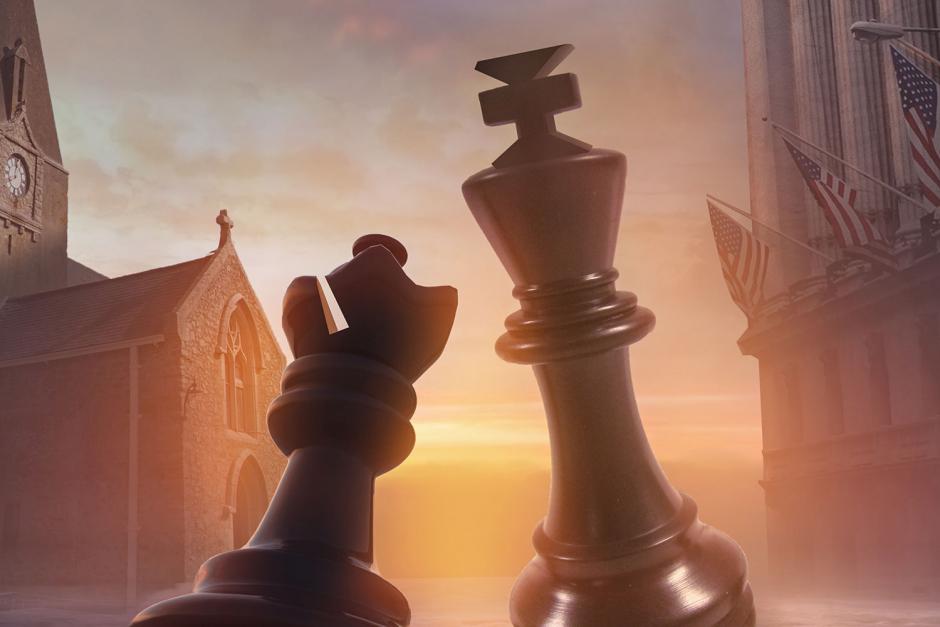 If we are to come to a correct understanding of Luther’s thought regarding the two kingdoms, spiritual and temporal, the kingdom of God and the kingdom of the world, the best place to begin is with his treatise on worldly authority, Von Weltlicher Obrigkeit (1523)….

Luther insists that it is of primary importance not to confuse the two kingdoms. Each must be true to its divine mission. Through the gospel God rules His spiritual kingdom, forgives sins, justifies, and sanctifies. But He does not thereby supersede or abolish the earthly kingdom: in its domain it is to rule with power and the sword. Any attempt to rule the world with the gospel is a double error, carrying a double penalty. First, the gospel is destroyed, and becomes a new Law to take the place of the old—man makes Christ another Moses, as Luther puts it. And in addition the world suffers: to quote Luther, “What would be the result of an attempt to rule the world by the gospel and the abolition of earthly law and force? It would be loosing savage beasts from their chains. The wicked, under cover of the Christian name, would make unjust use of their gospel freedom.” And again: “To try to rule a country, or the world, by the gospel would be like putting wolves, lions, eagles, and sheep all together in the fold and saying to them, ‘Now graze, and live a godly and peaceful life together. The door is open, and there is pasture enough, and no watchdog you need fear.’ The sheep would keep the peace, sure enough, but they would not live long.”

It would be false to try to rule Christians by the law, persuading them that through their own deeds and the workings of the law they could win justification before God. For that end God has ordained the gospel and the forgiveness of sins. And it would be equally false to try to rule the world with the gospel, for to do that God has ordained law, rulers, power, and the sword.

Luther, in issuing this solemn warning against confusing the two kingdoms or authorities, is setting his face against two different adversaries. On the one side, he opposes the Roman Catholic hierarchy, which in the name of the gospel lays claim to worldly power, and thereby imperils the gospel. But he is equally opposed to those whom he calls fanatics. They held that it is the Christian’s task to seek to rule society by the principles of the Sermon on the Mount, and that evil should not be resisted, but all earthly law and power abolished. This view is, of course, found in various forms in our day, as it was then. We frequently encounter the statement that the great failure of our society has been that it has not the courage to apply the ethical principles of the Sermon on the Mount to our common life and our relations in the state. Such a view finds no support in Luther. He is against it: it is contrary to the will of God to try to rule the world through the gospel. God has ordained an entirely different authority to rule the world. It is in accordance with His will that power and the sword are used to that end, and the world is under the sway of that authority, and not of the gospel.

The “Autonomy” of Worldly Life

What is the logical consequence of the sharp line Luther draws between the kingdom of God and the kingdom of the world, between spiritual rule and temporal? Does it not mean that earthly life is set free to follow its own standards, and that we are confronted with a domain where Christianity has nothing to say? Does it not mean, as has sometimes been said, that Luther makes political life a law unto itself? Evangelical theology, especially in Germany, has frequently answered that question in the affirmative in recent years. Christianity, it is held, is concerned with man’s inner life, with his relation to God: with secular and political life it has nothing whatever to do. The latter is propelled by its own power and acknowledges its own laws. For Christians to judge political life by Christian or ethical criteria is an encroachment. And here we come to the core of the problem presented by Luther’s conception of the state and of politics.

Unfortunately, theology has in the past occasionally allowed itself to be led astray by the political trends of the day, and to misinterpret Luther’s doctrine of the two kingdoms as a plea for secularization. It is easy to understand that for those who think solely along political lines it is inconceivable that political life should have to be subservient to an outside will, the will of God. But to hold up Luther on that account as an advocate of a secularized, autonomous political sphere of activity is a grotesque falsification. No one fought as he did against the secularization of society. No one so vigorously affirmed that earthly government is as much God’s own rule as is spiritual, and that God never drops the reins from His own hands. How then can anyone throw upon him responsibility for a position which holds state and political life to be sovereign and autonomous? A glance into his treatise on worldly authority will suffice to convince one of the utter falsity of the assertion that he preached the detachment of Christianity from state and political life. In almost the first line of his introduction to this pamphlet he says that he is going to “write about worldly authority and its sword, and how to use the same in a Christian manner.” Luther realized very well that there is a Christian and an unchristian way of using power. It is not the business of the spiritual ministry to bear the sword, but it must demonstrate the Christian way of bearing it. Without this very often neglected aspect of Luther’s teaching, his whole doctrine of the two kingdoms becomes distorted and unintelligible. The church is betraying an essential part of its mission if it does not continually, by exhortation and warning, remind those in earthly authority of the law of God to which they are subject. It has not merely to protest when the temporal authorities interfere with its own freedom to preach and to live as a church; it is commissioned to interpret the will of God in regard to the various ordinances He has instituted in the world to regulate man’s relation with his neighbors, and to stand forth uncompromisingly against injustice and tyranny. “To rebuke the authorities,” writes Luther, “is certainly not a revolutionary act when it is done at the divine command and in accordance with the law of God, openly, fearlessly, and honestly. It would, in fact, be much more dangerous to the public weal if a preacher were not to rebuke authority for its injustices.”

Thus there is neither confusion nor separation between the two kingdoms. The spiritual order does not claim ecclesiastical domination over the temporal, but on the other hand the temporal must not be permitted to become secularized, for the worldly government stands under the judgment of God and is bound by His will.

This double view which Luther takes of temporal life—that on the one hand it is not to be ruled by the gospel, and on the other is subject to the law and judgment of God—has given rise to much opposition, and many have thought to find a contradiction between the two aspects. And indeed, it is not too easy to grasp exactly what he does mean. It would be much simpler to drop one half and abide by the other. He says, for instance, that the world is not to be ruled by the gospel: then the inference is immediately drawn that Christianity has not to do with temporal life, and the result is secularism. On the other hand, “the life of the world is subject to the will of God,” hence the inference that the gospel is the basic principle and the law of the earthly realm, and we find ourselves among the “fanatics.” But Luther recognizes the two realms, his inevitable conclusion from a full understanding of the meaning of the gospel….

The wielding of secular power, like every other vocation, offers two alternatives, serving the devil or serving God. Any use of power for its own sake is serving the devil. Power is a deadly temptation to selfishness and vainglory, and for that reason Luther utters the warning “He who would be a Christian ruler must put away the thought that he would rule and be mighty. For the mark of judgment is upon all life whose end is self-advancement, and upon all works which are not done in love. And these are done in love when their end is not the desire or advantage or honor or comfort of the doer, but the honor and advantage and good of others.”

We may seek in vain for any fully evolved doctrine of the state in Luther’s thought. But he has given us what is more valuable still: he has shown us the Christian way of looking on the state and its responsibilities. In these days, so full of brutal lust for power and of the deification of the state often according to a feignedly Christian concept, there is a very special need that we should see the true purpose of God concerning temporal power. And for that there is no better guide than the New Testament, and Martin Luther, its greatest interpreter.

This article by Anders Nygren is excerpted from a longer article that appeared in the August 2002 issue of the Journal of Lutheran Ethics (volume 2, issue 8). Used by permission.