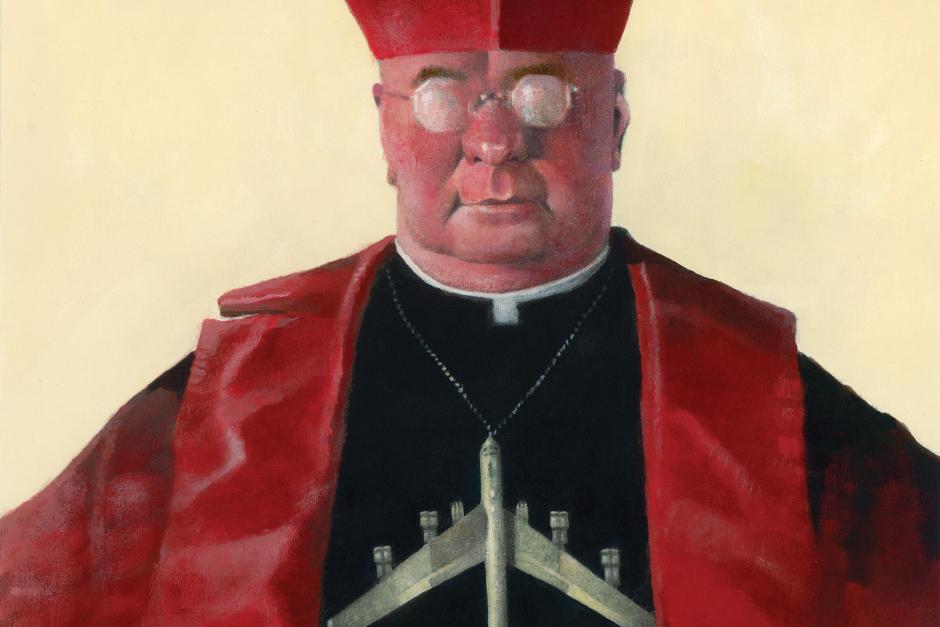 A priest approaches the weapon, blesses it, and then sprinkles holy water on it.He does so because the weapon will be used for “Christ’s war.” The scene is not from the Middle Ages, but given the mind-set of the priest, it might as well be.It’s 1965.The weapon blessed is a B-52 bomber about to go on a mission.“Christ’s war” is the American effort in Vietnam.The priest is Cardinal Francis Spellman.

Five years before any American pilots and troops set foot in Vietnam, departing president Dwight Eisenhower left the expression “military-industrial complex.”Eisenhower, or more likely one of his speechwriters, coined it to describe the overlap between big business and the military—a partnership born out of the cold war.Warning that this business-military nexus could potentially pose a threat to individual liberty, Eisenhower thus declared it needed to be monitored; but not severed, because it was required to protect the American people from world Communism.

For the anti-war Left the term suited their attacks on why America was in Vietnam.In their view it was a moneymaking scheme by Wall Street munitions makers in service of the imperialist, even fascist, American war machine.

But given the philosophy of priests like Spellman and other cold war proponents, the word “religious” should be added to the military-industrial complex term.For in their cold war zeal, it now seems rather obvious that they violated the separation of church and state called for in the Constitution, and literally called on America to return to a historical period when the “church” was the government and vice versa. The period was the Middle Ages, before the Age of Enlightenment came about, before the Reformation and the severing of links between church and state. Unfortunately, according to some ultraconservatives, this also led to Communism.

There is a reason social conservatives like Pat Buchanan look back nostalgically to the 1950s, for it is a period, above all others in the cold war, when the struggle against Communism demanded a religious faith to counter the its pseudo-spiritual appeal. Whittaker Chambers, in many ways the godfather of social conservatism, called it a struggle between “faith in God [and] faith in man.”And many Americans subscribed to this reductionism. Church membership went up from less than 50 percent in 1940 to 60 percent by 1955.The government got into the act as well, attaching such religious phrases as “under God” to the Pledge of Allegiance, and even to postage stamps now entitled “In God We Trust.”And Eisenhower merged church attendance with cold war patriotism, stating that it was the patriotic duty to attend regularly.

It was in this period that a young and intensely Catholic William F. Buckley wrote a book entitled God and Man at Yale, demanding that a religious/conservative version of political correctness be adopted by professors to instruct students in the glories of religion and free enterprise.

Religious visions were a feature of the 1950s.A housewife named Mary Ann Van Hoof claimed to have seen the virgin Mary, who instructed Van Hoof that the success of the American effort in the Korean War was tied to a renewal of faith by American Catholics.The combative themes of the cold war resulted in a veritable take on “soldiers for Christ” and “Onward Christian Soldiers,” when American citizens joined the Blue Army, which promoted religious visions voiced through their magazine Soul, with its 70,000 subscribers.

It is small wonder that Catholic Joe McCarthy was able to garner such religious support for four reckless years.But it should be noted that even anti-Communists of uncontestable religious faith like Whittaker Chambers refused support.Chambers correctly predicted that McCarthy, a “raven of disaster,” would damage the cause of responsible anti-Communism.

But not Cardinal Spellman, who, apart from the christening of American bombers, provided the perfect symbolism of church conjoining state when he walked across the stage after a McCarthy speech and shook the senator’s hand.He defended not only McCarthy’s ideology but the senator’s methods: “The first loyalty of every American is vigilantly to weed out and counteract Communism.”Indeed, Spellman pioneered the Senator’s methods.

The year before McCarthy started waving lists of supposed Communists in the government, 1949, Spellman was playing fast and loose with the Communist charge.When gravediggers who worked at the Calvary Cemetery in Queens, New York, struck for a pay raise, Spellman attacked them as “Communists” who waged an “immoral strike against the innocent dead and their bereaved families, against their religion and human decency.”In point of fact, their union, Food, Tobacco, Agricultural, and Allied Workers were fervently anti-Communist, with several members, gravediggers included, engaging in fistfights with Communists trying to take over their union.

Spellman wielded his considerable power, like McCarthy, in silencing critics by violating the right of a free press.When Dorothy Schiff, the publisher of the New York Post, a liberal newspaper highly critical of McCarthy, criticized Spellman’s political views in print, Spellman ordered Catholic-owned department stores in New York to pull their advertising ads from the newspaper. Such was the climate that Schiff, losing revenue, retracted her statements.

The cold war zeitgeist suited Spellman perfectly, particularly in the desires of some conservatives that to counter the admittedly appealing faith of Communism, a return to the Middle Ages was needed; a time before the advent of the Enlightenment, with its individual rights and separation of church and state had paved the way for Communism.Conservative intellectual Richard Weaver saw the Middle Ages as unjustly criticized.Social conservative John Holloway, although critical of the Middle Ages penchant for torturing “infidels,” asserted that the “spirit of the Middle Ages,” which was “God-centered” rather than “man-centered,” was required to fight, “spiritually and intellectually,” Communism.Frederick Wilhelmsen seconded this view, and provided a history lesson of medievalism for cold warriors to draw from.“Medieval man,” he wrote, “sacramentalized the whole of being,” providing much the much-needed “unity of all things in existence,” and preserved the accumulated wisdom of tradition rather than using history, in the case of Communism, as something to be “manipulated.”Such views, he argued, applied not only by Communists but also to the more “liberal” religions of Calvinism and Manchesterianism and all of these doctrines “shattered for all time” the humanist and chivalric values of medievalism.Now, he wrote, with such “chivalry” destroyed, the “anti-humanistic” values dominated the modern world.

It must be said, however, that even liberal presidents used priests for foreign policy objectives.During World War II Franklin D. Roosevelt gave Spellman more power than diplomats stationed in Allied countries, by appointing him the official vicar of the Armed Forces.But Roosevelt used him for more than giving sermons to the troops; Spellman was used to gather intelligence in Europe, Africa, and the Middle East.

And it must be said of Spellman that he was no bigot.A close confidant of FBI director J. Edgar Hoover, Spellman refused to follow Hoover’s request to attack Martin Luther King, Jr., and even sent New York priests to support and to march alongside King in the civil rights marches in Selma and Montgomery.He attacked racial discrimination, when applied to public housing.

Nor was he was so wedded to cold war Catholicism that he ignored repressive policies by American-friendly governments.An early supporter of the Catholic leader of South Vietnam, Ngo Dinh Diem, he nevertheless was horrified by Diem’s crackdown on political opponents and stopped supporting him by 1963.

But by blessing American bombers, sending priests at Lyndon B. Johnson’s request to the Dominican Republic to keep the country, recently invaded by the U.S. because of a localized Communist threat, in the free world camp, and his fervent support of Vietnam until his death in 1967, Spellman was the religious face of the cold war mandate that sanctioned, in all senses of the word, the violation of church and state.