Toward a Medieval Model

Amid all the activity of a turbulent year, many missed the March 3, 2005, filing of the Constitution Restoration Act of 2005 (CRA) in both houses of Congress (S. 520 and H.R. 1070). If enacted, the CRA would effectively turn the United States into a theocracy, in which the arbitrary dictates of God—as interpreted or discovered by a judge, politician, or bureaucrat—would override the rule of law.

In the words of the legislation, which is identical in both houses, federal judges would be barred from reviewing "any matter to the extent that relief is sought against an entity of Federal, State, or local government, or against an officer or agent of Federal, State, or local government (whether or not acting in official or personal capacity), concerning that entity's, officer's, or agent's acknowledgment of God as the sovereign source of law, liberty, or government."

The enforcement clause of the CRA calls for the "impeachment, conviction, and removal of judges" who exceed the new jurisdictional limit or violate the CRA's additional prohibition on reliance on foreign or international law.

Given its drastic approach, the CRA could easily be dismissed as a legislative flight of fancy were it not for the fact that as of this writing the bill has found 45 cosponsors in the House and eight in the Senate. While the likelihood of passage of this bill remains slim, the remarkable support that this bill is receiving, and the dramatic way in which it would affect American jurisprudence if passed, make it deserving of our close attention.

Cowritten by Roy Moore, embattled Ten Commandments display advocate and former chief justice of the Alabama Supreme Court, and his attorney, Herb Titus, and introduced by Senator Richard C. Shelby (R-Ala.) and Representative Robert B. Aderholt (R-Ala.), the CRA is designed to provide protection so that local and state officials can "acknowledge God" without fear of being sued in federal court for their actions.

Ever since the Supreme Court issued its ruling on Roe v. Wade in 1973, legalizing abortion, Christian fundamentalists have become increasingly galvanized against the federal court system, because they perceive that liberal groups have used the courts to achieve what could not be done legislatively. Theologian Francis Schaeffer, in a speech at Coral Ridge Presbyterian Church in 1982, said this was because "the courts are not subject to the people's thinking, nor their will, either by election nor by a re-election. Consequently, the courts have been the vehicle used to bring [secular humanism] and to force it on our total population."

Fundamentalists also blame the federal courts, and in particular the Supreme Court, for the breakdown of morality in the United States, which they believe directly correlates with the Court's decisions on compulsory school prayer and Bible reading during the latter half of the twentieth century.

Rather than continue to attempt to win victories in the federal courts, and blocked by legal precedent, the proponents of the CRA hope to bypass the courts altogether by limiting the jurisdiction of the courts. They argue that this is possible because Article III of the Constitution grants Congress the authority to establish and control the composition and jurisdiction of the federal courts.

If passed, the CRA could also eliminate that portion of the Fourteenth Amendment that operates to apply the Constitution's Bill of Rights to the state and local governments, and send the nation into a methodical tailspin when it comes to individual rights.
Prior to the ratification of the due process and equal protection clauses of the Fourteenth Amendment in 1868 (following the Civil War), the Bill of Rights was thought to apply only to actions of the federal government. And state and local abuses did occur.

In 1857 the Supreme Court, in Dred Scott v. Sandford, ruled that it did not have jurisdiction, even if a slave started in a slave state and moved to a free state, reasoning that the federal court could not step in and take away the "property rights" of the owners in the originating state. By failing to apply the Bill of Rights to state actions, the Scott Court galvanized the nation by effectively spreading slavery across state lines. 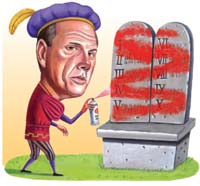 During an 1866 debate over the postwar Fourteenth Amendment, which in part was responsive to Scott, future U.S. president James Garfield warned of the abuses of local politics when he said, "In reference to persons, we must see to it that, hereafter, personal liberty and personal rights are placed in the keeping of the nation; that the right to life, liberty, and property shall be guaranteed to the citizen in reality as they are now in the words of the Constitution, and no longer left to the caprice of mobs or the contingencies of local legislation. . . . We must make it as true in fact as it is in law, that 'the citizens of each State shall be entitled to all the privileges and immunities of the citizens in the several states."

Although representatives from the Southern states initially opposed the Fourteenth Amendment as infringing upon their local autonomy, the courts have applied the amendment to set precedent extending all of the provisions of the Bill of Rights to citizens at the state and local level, beginning with the freedom of speech in Gitlow v. New York (1925), and including free exercise of religion in Hamilton v. Regents of the University of California (1934).

The Constitution Restoration Act of 2005 would, and in fact is designed to, reverse nearly 140 years of legal actions to the states, whereby religious fundamentalists can have more control over the outcome of decisions. State supreme court decisions would be the final word when it comes to the way that local governmental officials apply the "sovereignty of God" to their decisions, and would erase many constitutional protections that the CRA claims to restore. Or perhaps more accurately, the CRA would indeed "restore" the Constitution to the Dred Scott days.

On November 11, 2005, the Louisiana state legislature passed a resolution (SCR 30) requesting that Congress pass the CRA. The resolution, which passed the state senate unanimously, makes a curious argument. It says that when the First Amendment states that "Congress shall make no law respecting an establishment of religion," that is a specific and unequivocal instruction directed only to the United States Congress. The Louisiana resolution thus reasons that this limits the power of the amendment and that "the United States Constitution makes no restriction on the ability of the states to acknowledge God, the Supreme Ruler of the Universe."

The attempted removal of constitutional rights and the establishment of the "acknowledgment of God" as valid law would inevitably lead to a legal, if not practical, reemergence of the medieval model in which both church and state claimed political power that derived directly from God. Between the establishment of the Holy Roman Empire and the writing of the Declaration of Independence, the claim of "divine right of kings" made political leaders into spiritual leaders whose somewhat spurious theological viewpoints became the law of the land.

With both the church and the crown presumably speaking for God, the people were forced into subservience and were unable to question the dictates of their divinely appointed rulers. Any human rights or freedoms that existed were provided at the paternal pleasure of the crown or the church, and could accordingly be manipulated and eliminated through excommunication, punishment, or even death.

The founders of the United States turned this concept of "rule by divine right" on its head when they recognized the sovereignty of "we, the people." The founders wisely recognized the sincerity with which incompatible religious views were held, and thought it best that the government not assume the role of sovereign theologian. They understood the types of abuses that could occur when political leaders assumed that they were speaking on behalf of God.

The American experiment has proved that when allowed to grow freely, religion flourishes. This is evident in the depth of religious devotion, in which people are free to express the full range of beliefs undisturbed, in forums ranging from individual conversations to megachurches where tens of thousands attend services. This ubiquitous freedom places faith the mere push of a button away from most Americans, with a dazzling array of spiritual content being present on the Internet, radio, and television.

And it is just as easy to spread religious messages, with the only limitations being moderate investments in time and money.

The continuous complaints of modern fundamentalists that they are being shut out of the public discourse and are, indeed, facing "persecution" are difficult to understand in the context of so many opportunities and venues. In short, they perceive that they are being persecuted because they are unable to "acknowledge" God in certain unavoidable governmental venues. Fundamentalists are longing for the day when all Americans will be forced to come face-to-face with their version of "the truth" in unavoidable places such as public schools, courthouses, and the Department of Motor Vehicles. The idea, apparently, is that while awaiting trial, for instance, you would be unable to avoid reading a display of the Ten Commandments, which would remind you that you had not only violated the laws of the state but should also fear the condemnation of God.

The CRA is the latest in a series of increasingly troubling attempts by fundamentalists to secure religious authority in the secular world. In the midst of arguments against "activist judges" on the federal bench, they support the "civil disobedience" of jurists such as Roy Moore, whose "acknowledgment of God" consisted of placing a display of the Ten Commandments in the rotunda of the Alabama Supreme Court, and his right to deny other groups the right to post other forms of expression.

Moore's and the CRA's definition of "acknowledgment" of God extends far beyond intellectual assent or recognition, and moves toward establishing the actual supremacy of the fundamentalist brand of Christianity over all other forms of religious or secular thought. The Ten Commandments would be more than a symbol—they would be the law of the land if a state approved it, including the first four, requiring recognition of the supremacy of God.

When Alabama state representative Alvin Holmes asked then Chief Justice Moore to include Martin Luther King, Jr.'s "I Have a Dream" speech alongside the Ten Commandments monument, Moore responded that "the placement of a speech of any man alongside the revealed law of God would tend in consequence to diminish the very purpose of the Ten Commandments Monument."
Moore similarly denied an atheist group's request to display their symbol, an atom, which Moore said was inconsistent with the rotunda's theme.

While passage is not expected this session, the Constitution Restoration Act would "restore" the United States to a time and place in which civil rights were inaccessible. If passed, this attempted end run around the Constitution and the intent of the Founders will lead to fragmentation and confusion, ultimately failing to meet the equal protection requirement of the ultimate commandment, which is to love our neighbors as ourselves.