Toward a Paradigm of Religious Faith in Society 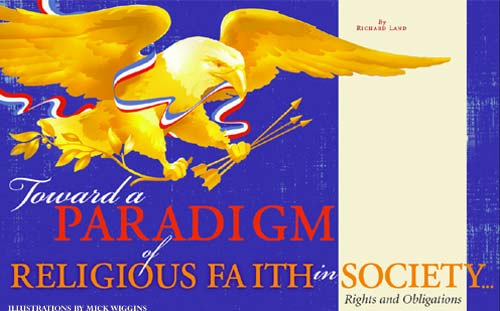 For the past few years I have been writing a book entitled The Divided States of America? What Liberals AND Conservatives Are Missing in the God-and-Country Shouting Match! The book, published this past April, is the product of almost a half century of reflection and study about an issue that matters deeply to me as an American committed to the Baptist faith tradition.

I might describe my book as an equal opportunity offender. It has two whole chapters explaining how both liberals and conservatives have taken a wrong fork in the road when it comes to the role of religious faith in America. I outline how both "factions" should, and should not, act in this ongoing American story. The shorthand version of those two chapters is that conservatives much too often assume that God is on their, or America's, side and that liberals much too often assume that God doesn't have a side in the perplexing issues that face us as a country—vital issues such as the sanctity of all human life from conception to natural death and at all points within those parameters.

One of the more enjoyable experiences one garners from writing a book is getting feedback. Many people paid me the great compliment of not only taking their valuable time to read the book, but taking the time to give me a detailed response. I appreciated this indication that they gave my ideas serious attention. By far the most personally satisfying response has been of this type: "You have articulated what I have believed for years, but had never read as a developed model before."

While the critiques of both liberals and conservatives have generated considerable interest, most responses have come in two areas: the book's model of religious "accommodation" and the book's definition and development of American "exceptionalism."

In The Divided States of America?I construct a model, or paradigm, of the role of religious faith in society. Around our world in the early twenty-first century, societies are basically seeking to implement one of three models of how religion relates to government and society.

The first model, "theocratic acknowledgment," would have the government officially favoring or sponsoring a majority faith, and often seeking to coercively enforce at least outward observance of that faith. Perhaps the highest profile proponent of this model in the world is Iran where, among other things, the government coercively enforces the wearing of Muslim head coverings for women.

A second model, "supreme secularism," insists that the ultimate value of the state is secularism, and all religious faith and observance must acquiesce to a state-enforced secular sanitization of the public square and public places. A high-profile proponent of this model is modern-day France, where Muslim girls were given the stark state-coerced choice of abandoning their faith-mandated head coverings or forgoing the right to attend public school.

A third model, "principled pluralism," argues that the government should neither coerce, sponsor, nor suppress religious faith, but instead should "maximally accommodate" the right of all its citizens to express their varying faiths or lack of faith according to the dictates of their own consciences. In this model, everyone's faith perspectives are welcomed in the public square, with the government showing no favoritism. Instead, government plays the role of judicial umpire, guaranteeing everyone's right to expression—minority, as well as majority religions; and to both faith-affirmers and faith-deniers.

I believe the model that most fulfills the aspirations of the founding fathers and the protections of the Constitution's First Amendment free exercise guarantee is "principled pluralism." I also believe that this is what a significant majority of Americans will choose as their preferred model when presented with these three options. A majority of Americans do not want government-sponsored or government-established religions. Most Americans of religious faith understand that government-sponsored religion is like being hugged by a python—it squeezes all the life and vitality out of religion.

Most Americans do not want "supreme secularization," and its censorship and suppression of religious faith. "Principled pluralism" shows respect for all faiths and holds that no human authority should coercively interfere with a fellow human being's relationship to God. Such a stance is most in accord with our founding ideals and aspirations. When offered this model, a substantial majority of Americans stand ready to embrace it.

I like what Senator Joseph Lieberman noted in the foreword to The Divided States of America? "The United States is a faith-based institution. You see it right at the beginning in the first American document, the Declaration of Independence, where our Founders said they were forming their new government to 'secure' the rights to life, liberty, and the pursuit of happiness, which were (and are) the 'endowment' of our 'Creator.'"

Senator Lieberman goes on to conclude that in a nation as religious as America, where nearly two out of three Americans say religion is "very important" in their lives, the attempt to "separate America and its people from their faith in God and the values it engenders" is both "an unnatural and unnecessary act."

American "Exceptionalism"
The second subject of The Divided States of America? that has drawn the most impassioned and sustained response from readers is my firm belief that America does have a special role to play in the world as the proponent and defender of freedom and human rights.

My formulation of this American "exceptionalism" is both shared by millions of Americans—and often misunderstood by liberals and conservatives alike. I well remember being with Jim Wallis on a panel discussion at Chautauqua in 2005. Jim was asked by someone in the audience to outline the points on which he and I agree and disagree. Jim explained that we both believe that religious faith has a vital, indeed an invaluable, role to play in American society—as opposed to the secularists who disagree vehemently with both of us on that score. We have substantial disagreement, he allowed, about how religious faith should be "played out in American society and also in foreign policy" (Divided States , p. 30).

American "exceptionalism," as I and millions of other Americans understand it, is not a doctrine of pride, privilege, and prejudice, which allows America to be judged internationally by a lower standard than other nations. Instead, it is a "doctrine of obligation, responsibility, sacrifice, and service in the cause of freedom" (Divided States, p. 31).

Jim Wallis then asked me for my scriptural justification for such a belief. I cited Luke 12:48: "From everyone who has been given much, much will be required; and to whom they entrusted much, of him they will ask all the more" (NASB)*—to whom much is given, much is required.

America as a nation, and the American people as a people, have been wonderfully blessed with an abundance of natural resources as well as a remarkable heritage of freedom, the rule of law, and "government of the people, by the people, for the people."

There was either a fortuitous or a providential set of circumstances in the development and rise of America. I, of course, believe there was more providence than mere good fortune involved in the bountiful blessings experienced by America. Blessings, by definition, are undeserved and unmerited—that is why they are called "blessings." Such undeserved and unearned favor invokes obligation.

Most people of a more liberal persuasion find such beliefs anathema and reject any claim of America being "exceptional"—in blessings or anything else. Unfortunately, far too many conservatives assume that such blessings mean that America is God's new "chosen nation."

I summarized my argument for American "exceptionalism" as follows: "What liberals and conservatives are both missing is that America has been blessed by God in unique ways—we are not just another country. But neither are we God's special people. I do not believe that America is God's chosen nation . . . we are not the new Israel. We do not have 'God on our side.' We are not God's gift to the world.

This means that having been undeservedly given so much, we have an obligation and a responsibility to be the proponent and friend of freedom for all people. We have no right to impose freedom on others, but we do have an obligation to help those who desire it to achieve it whenever possible.

We are not just a country with interests—we are also a cause, and that cause is to be FREEDOM.

Dr. Richard Land has served as the president of the Southern Baptist Convention's Ethics and Religious Liberty Commission since 1988. He writes from Franklin, Tennessee.