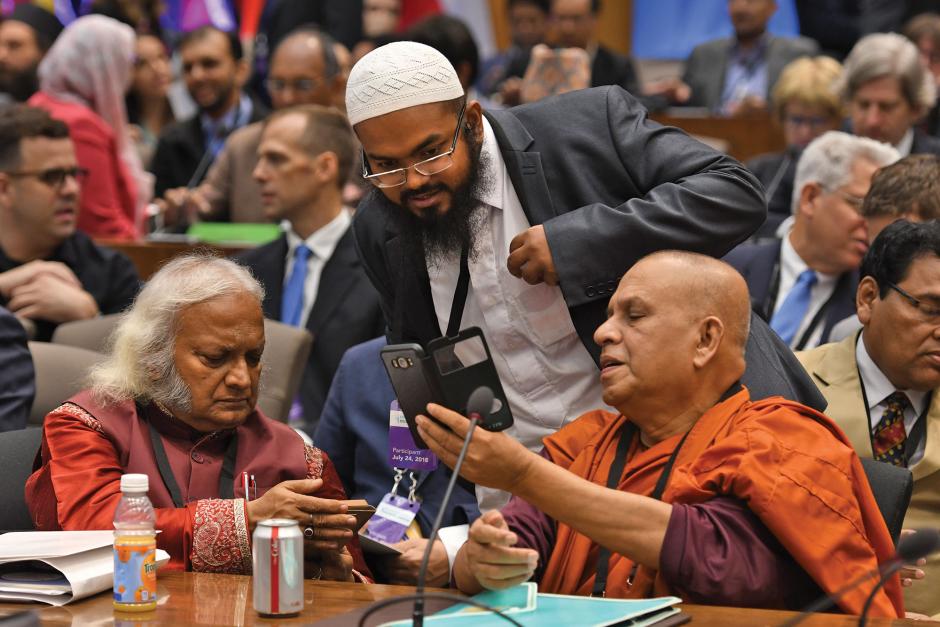 “Nothing approximating this high-level foreign policy gathering on religious freedom has ever happened before,” proclaimed Religious Freedom Institute president Tom Farr, a veteran of global religious liberty issues. Plaudits have continued to roll in for the first-ever Ministerial to Advance Religious Freedom, held July 24-26, 2018, by the Department of State, and held at the agency’s headquarters in the Foggy Bottom section of Washington, D.C.A second event is anticipated for 2019.

“The United States must lead this new multinational coalition and begin the process of changing things on the ground,” added Farr, the founding director of the State Department’s office of international religious freedom. “With this vice president, this secretary of state, and this ambassador, I believe the stars are aligned actually to reduce persecution and advance international religious freedom.”

Brian J. Grim, president of the Annapolis, Maryland-based Religious Freedom and Business Foundation, told Liberty he was pleasantly surprised by the diversity of participants, including those from countries in which religious freedom is lacking.

“Given what the expectations were, a politicized, to-the-right type of event, the ministerial turned out something very different, looking for solutions to the problems, rather than a narrow focus on pet issues and concerns,” Grim said.

He added, “The panel I was on, the economic impact of religious freedom, [demonstrated that] the ministerial itself delved into issues that aren’t on the main talking points. I’m pleased that this was also a focus; not just to ‘name-and-shame’ [offending nations], but significant attention to the benefits of religious freedom, and why it’s good for a country.”

Adding to the plaudits, Katrina Lantos Swett, a former chair of the U.S. Commission on International Religious Freedom, expressed appreciation for the emphasis now being placed on religious liberty worldwide by the U.S. government.

“Secretary Pompeo deserves enormous credit, as does Ambassador Brownback, for convening this consequential and powerful ministerial on international religious freedom,” Swett said in an e-mail. “It sent an unmistakable message that this administration intends to genuinely prioritize international religious freedom in the conduct of U.S. foreign policy. Many in attendance, regardless of their political affiliations or viewpoints, expressed the opinion that no administration has been as visible and proactive in its advocacy on behalf of this core human right.”

The level of approbation—from perspectives as diverse as Britain’s Economist newspaper to the Baptist Joint Committee for Religious Liberty, among many others—is notable in an era in which United States foreign policy under the administration of President Donald J. Trump could easily be likened to Forrest Gump’s famed “box of chocolates”—one never knows what they’ll find inside.

That apparently was not the case with this event, which featured speeches by U.S. Vice President Mike Pence and Secretary of State Michael R. Pompeo, and which saw participation from high-level officials and foreign ministers from 80 nations. According to Ambassador Samuel D. Brownback, a former U.S. senator and governor of Kansas, who now heads the International Religious Freedom office: “We were as inclusive as possible, because we wanted to include every one of every faith or no faith at all: everyone who cares about religious freedom and who will join us in this cause. And all of that was intentional, because religious freedom really truly is for everyone. It’s a right given by God and is a beautiful part of our human dignity.”

Not every guest heard laudatory words about their countries: representatives of several “tier 2” countries of particular concern on religious liberty issues—as designated by the State Department—were also present, attending from Bahrain, Egypt, Indonesia, Iraq, and Kazakhstan.

Turkey, a longtime U.S. ally, whose relationship with America is strained over issues, including the house arrest of evangelical Christian pastor Andrew Brunson, was sharply criticized. Pence promised “significant sanctions on Turkey” if the nation did not allow the cleric to go home. (Brunson remains under house arrest in Izmir, Turkey, and the sanctions are in place as of this writing.)

The vice president also noted the difficulties of a minority faith in Russia.

“In Russia more than 170,000 Jehovah’s Witnesses face similar persecution to other countries around the world,” he said. “They’re legally banned from practicing their faith. Government agents have seized Jehovah’s Witnesses’ headquarters near St. Petersburg, raided their prayer halls across the country, and arrested and imprisoned scores of believers.”

The vice president also noted continuing tensions between the Ortega government in Nicaragua and the Roman Catholic Church, alleging the regime of “virtually waging war” on the faith. North Korea’s deep denial of religious freedom was mentioned by Pence, as well as the ongoing persecutions of Christians, Tibetan Buddhists, and Uighur Muslims by the People’s Republic of China.

He also mentioned the persecution of Jews, Christians, and Baha’is in Iran, as well as the Shia government’s disdain for its Sunni Kurd population. “They are routinely fined, flogged, arrested, assaulted, and even killed,” Pence said of the religious minorities. “In 2016 alone, 20 Sunni Kurds were executed for the crime of allegedly ‘waging war against God,’ simply for practicing their faith.”

Pence went on to outline why the United States takes such a great interest in the topic. “The right to believe or not believe is the most fundamental of freedoms.When religious liberty is denied or destroyed, we know that other freedoms—freedom of speech, of press, assembly, and even democratic institutions themselves—are imperiled,” he said.

Secretary Pompeo, who declared that “my own faith is of the greatest importance to me personally,” told the conference that the United States wishes not only to promote religious liberty, but also to recognize nations in which reforms are taking place.

“When religious freedom flourishes, a country flourishes,” Pompeo said. “As one example today, we applaud the steps that Uzbekistan is taking toward a more free society. We have great confidence that a degree of religious freedom greater than before will have a positive ripple effect on their country, their society, and the region as well.”

Secretary Pompeo also lauded “several Gulf countries” for their actions: “As the region has become an economic hub and attracted foreigners from many faiths, several governments have taken important steps. They’ve been wise to permit the construction of places of worship like churches and temples, thus becoming an even more attractive destination for international investment,” he said.

But, of course, speechifying by American politicians could not be the only activity of such an event. Dramatic testimony was heard from victims of religious persecution in many parts of the world, including Christian North Korean defector Ji Hyeona; poet Tahrir Hamut, a Uighur Muslim from China; and attorney Razia Sultana, a Rohingya Muslim from Myanmar.

Hamut, speaking through a translator, said of life under Chinese rule, “There are unprecedented restrictions on the religious lives of Uighurs. The government has confiscated and burned religious books and demolished mosques. Religious activities that were once legal are now illegal and an excuse for persecution.”

Jamie Powell, the wife of the John Cao, a Christian pastor serving a seven-year sentence in China on false charges of “facilitating organized border crossing,” said Cao has lost 50 pounds while in captivity and has not been allowed to communicate with his family, even when they traveled to visit him. (Cao was detained in the Myanmar-Chinese border area, where he helped build Christian schools.)

And Jacqueline Furnari, Andrew Brunson’s daughter, spoke of the heartbreak caused by her father’s imprisonment, which had meant the Christian pastor had been unable to attend her college graduation or her wedding.

Among the positive steps resulting from the conference was the release of the “Potomac Declaration,” a statement that affirms human rights, including freedom of religion.

The text notes, “Religious freedom is essential for achieving peace and stability within nations and among nations.Where religious freedom is protected, other freedoms—like freedom of expression, association, and peaceful assembly—also flourish.Protections for the free exercise of religion contribute directly to political freedom, economic development, and the rule of law.Where it is absent, we find conflict, instability, and terrorism.”

A corollary document, the “Potomac Plan of Action,” calls on nations to defend the freedom of religion or belief; confront legal limitations on religious liberty; advocate for equal rights, including protection of religious minorities; respond to genocide and other mass atrocities; and preserve cultural heritage, including religious heritage sites.

Aaron Rhodes, president of the Forum for Religious Freedom—Europe, whose 2018 book, The Debasement of Human Rights: How Politics Sabotage the Ideal of Freedom,explores religious liberty issues among others, noted that the ministerial documents emphasize the role of individual states, and not world organizations, in strengthening human rights.

“This plan does not even mention the United Nations, which has demonstrated an inability to protect freedom of religion,” he told Liberty via e-mail. “The reason is clear:most member states do not believe in freedom of religion. Power in the U.N. is wielded on a democratic basis, whereby China and Islamic theocracies hold sway. More than 1 billion Muslims do not have the right to change their religion, and some states, including those that are members of the U.N. Human Rights Council, can execute people for the crime of apostasy.The U.N. won’t address this question.”

Rhodes asserted, “We need to come to grips with the fact that to promote universal natural rights, we cannot depend on an inclusive international organization. Only particular societies have embraced the universality of human rights. They must work together to support the aspirations to enjoy their human rights of people elsewhere, as well as guarding their own liberties.”

On the Adventist News Network, Seventh-day Adventist Dwayne Leslie, the church’s liaison to the U.S. Congress, praised the commitment shown by the event.

“This ministerial was noteworthy, not just because it brought together such a broad range of people, governments, and organizations to focus on religious freedom,” said Leslie. “It was significant because it signals an intent by the United States to engage with this issue for the long term, and to work with others to generate action globally.”