We Must Not Be Intimidated 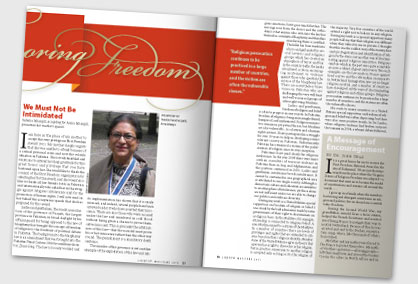 I am here in the place of my mother to accept this very prestigious First Freedom Award 2011. My mother deeply regrets that she was unable to attend because of a critical personal crisis and now the volatile situation in Pakistan. She is truly humbled and wants me to extend her deep gratitude for this great honor and privilege that you have bestowed upon her. She would like to thank the council of the First Freedom organization for selecting her for this award, and she would also like to thank all her friends both in Pakistan and internationally who aided her in the struggle against religious intolerance and for the promotion of human rights. I will now read on her behalf the acceptance speech that she has prepared for this award.

Ladies and gentlemen, the recent assassination of the governor of Punjab, the largest province in Pakistan, in broad daylight by his official guard for being opposed to the law of blasphemy has brought the concept of freedom of religion to the forefront of political debate in Pakistan. The background to the blasphemy law is an amendment that was brought into the Pakistan Penal Code in 1986 by a military dictator, Ziaul-Haq. The law is loosely worded and its implementation has shown that it is easily misused, and indeed, several people have been arrested under it who have asserted their innocence. There are also those who were accused under the law and murdered in cold blood without being given a chance to prove themselves innocent. This is precisely the arbitrariness of this law—that the accused must prove his or her innocence rather than the other way round. The punishment is a mandatory death sentence. 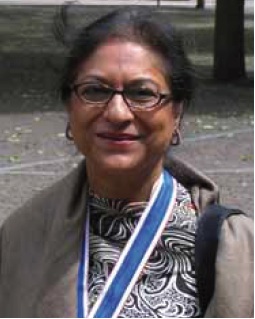 The murder of the governor is yet another example of the exploitation of the law and religious emotions, but it goes much further. The message now from the clerics and the orthodoxy is that anyone who criticizes the law has themselves committed blasphemy and therefore murdering them is justified. The killer has been made into a hero and garlanded by several lawyers and religious groups which has created an atmosphere of terror and fear in the country. Sadly, the media also played a role in encouraging incitement to violence against those who question the misuse of the blasphemy law. There are nevertheless brave voices in Pakistan who are challenging the very well-knit and well-resourced groups of ultra-right-wing Muslims.

Ladies and gentlemen, freedom of religion and belief is a key to progress in any society. In Pakistan, freedom of religion is being increasingly denied, hampered, and asphyxiated. Religious minorities remain in perpetual threat, but Muslims are also vulnerable. As a lawyer and a human rights activist, I have participated in a struggle for over 30 years to help in developing a more tolerant society in Pakistan. Unfortunately Pakistan has remained a victim of the politicization of religion since its very inception.

Pakistanis have paid dearly for religious intolerance. In the year 2009 there were more civilian casualties of terrorist violence in Pakistan than in Iraq and Afghanistan, and this pattern continued in 2010. Ladies and gentlemen, intolerance breeds intolerance. It cannot be contained in one geographical area or attributed to one single society. Although a democratic culture and education are antidotes to an atmosphere of intolerance, yet these alone are not sufficient unless we are able to change our politics and embrace diversity.

During my work as a United Nations special rapporteur on freedom of religion or belief I was struck by the bold admissions made by some governments of their right to discriminate on a religious basis. In the Maldives, for example, citizenship is connected to religious belief. A non-Muslim cannot be a citizen of the Maldives. In a number of countries there are levels of privileges and rights that are extended to citizens based on their religious identity. Member states of the United Nations agree in theory that a person has a right to choose his or her religion, but in practice conversion to another religion is accepted only as long as it is the religion of the majority. Very few countries of the world extend a right not to believe in any religion. During my work as a special rapporteur many people told me that their religion was different when they talked to me in private. I thought that this was the saddest story of the twenty-first century. Registration and identification of religion by the state is yet another way of discriminating against religious minorities. Religious symbols which in the past were quite acceptable are now a subject of great controversy. Two such examples are the law made in France against head scarves and the referendum on minarets in Switzerland. Immigration laws are no longer religious neutral, and a number of countries have developed subtle ways of discriminating against religious and ethnic groups. Religious persecution continues to be practiced in a large number of countries, and the victims are often the vulnerable classes.

My visits to many countries as a United Nations special rapporteur on freedom of religion and belief were often depressing, but there were also some positive trends. In Sri Lanka, where religious violence had broken out post the tsunami in 2004, a vibrant debate followed, after which the government was able to facilitate a dialogue between the Buddhists and the Christians that resulted in an agreement for shelving an anti-conversion bill. Religious differences are very well tolerated in a number of Latin American countries. There are a large number of examples where multicultural civil societies have been able to act collectively to prevent violence on the basis of religion. In my experience common decency exists in all classes, rich or poor, and therefore to come to the simple conclusion that education alone will end religious intolerance is unfounded.

I have witnessed thousands of people living in shanty towns who come from different faiths and beliefs and enjoy celebrating each other's religious festivals. There are no taboos in these communities. They may not share the same faith or belief but they are bounded together by the curse of poverty, which makes them interdependent. In contrast, people who most often exploit and politicize religion to advance their own agendas are affluent, skilled, and literate. It is not only literacy that is vital, but the quality of education which develops a sense of security to accept and enjoy diversity.

In my work as United Nations special rapporteur there was lot of focus on interfaith dialogue. I have no doubt that such dialogue has its advantages. Nevertheless, any dialogue must at least be candid and honest. In the atmosphere that prevails in Pakistan this is simply not possible. Freedom of expression on religion is asphyxiated, and even those who share similar values of human rights speak in whispers. I fear that the more progressive sections of our society, who in my view are significant in numbers, are being perpetually intimidated and hopelessly marginalized by militant religious factions. We have to face huge challenges ahead. To meet these challenges, we need to build more effective alliances and strategies even though the democratic transition in our country is fragile and an atmosphere of fear has impeded creative thinking. Political parties with progressive agendas are weak, but their existence alone is an obstacle against the obscurantist forces that are determined to capture total power in Pakistan. At this stage we appeal to all those who stand against the politics of exploiting religion for oppressing the rights of people to support a democratic Pakistan.