What a Blessed Country It Is! 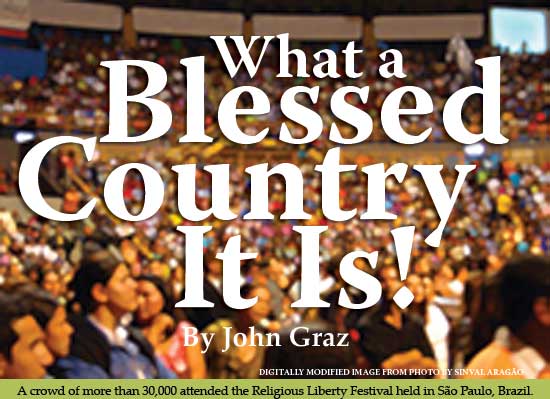 A group of officials from a country in Central Asia were visiting the International Religious Liberty Association at the world headquarters of the Seventh-day Adventist Church. We did our best to make their visit interesting and invited them to a dinner in their honor. They asked us to explain the relations between the government and religious minorities in the United States. We talked about religious freedom and church-state separation. Sitting by me, a member of the delegation was listening very carefully. Then he said in a soft voice so only I could hear, "What a blessed country it is!"

Time to Say Thank You
We received our norms of religious freedom as a gift from courageous people who sometimes did not share our beliefs, but wanted all humans to be free

This dream came about because of their understanding of human dignity. Few of us living in North America have been openly and legally persecuted or discriminated against. Why? Because religious freedom was already a fact a long time before we were born. What a blessed country it is where we have inherited religious freedom.

I think the time has come to say publicly: Thank you for religious freedom! Not a little or a timid or a confidential thank-you, but a massive thank-you!

More than half of the world population is living in 40 countries where religious persecution and discrimination are a fact. According to some experts, about 300 million Christians are legally discriminated against. Every day I receive information about churches attacked, believers arrested or beaten, or worship services interrupted by the police or the military. This world is not headed toward more religious freedom, not at all. The time has come for all citizens who care about religious freedom and live in countries where this fundamental freedom is protected, to say publicly: Thank you!

We need to look to holding Festivals of Religious Freedom. We, here in places of religious freedom, need to proclaim what we believe in and want to protect and promote.

Celebration of a Freedom
I believe in religious liberty congresses, symposiums, and meetings of experts. They are important in our promotion and defense of religious freedom. They reach experts, government people, and religious leaders. But we need to involve all people. We need to involve people in great numbers. We have decided that in connection with every world congress on religious liberty organized by the IRLA (International Religious Liberty Association), we will hold a meeting for masses of people. The first "festival" was held in a church in Rio de Janeiro in 1997, a few days after the IRLA World Congress. Young people, musicians, and children were involved in the program. We enjoyed the same experience in Manila in 2002 and in Kiev and Trinidad in 2005.

The programs typically started on Saturday morning in a religious context, with testimonies, prayers, and a sermon. The afternoon was devoted to a more specific celebration, where experts and preachers led in a program featuring musicians, poets, actors, and others. These three-hour programs attracted more people than there were seats. A 2006 program in Bucharest attracted some 4,000 people to an outstanding program. It was a great beginning to a dream!