Andrew Foster November/December 2004
In Gulliver's Travels Jonathan Swift wrote about the long war between "the two great empires of Lilliput and Blefuscu" over which end of an egg should be broken, the big or the little one. According to earliest historical accounts, when the grandfather of Lilliput's present king broke open an egg in the traditional manner, that is, of the big end, he cut his finger. "Whereupon the emperor his father published an edict , commanding all his subjects, upon great penalties, to break the smaller end of their eggs." Some, highly resentful of the edict, revolted and fled to Blefuscu, whose leaders were constantly egging on these dissenters in their refusal to stop breaking eggs on the large end (hence known as Big-endians). Eventually war broke out between Lilliput and Blefuscu; many ships were sunk and thousands died.

If Swift's satire, mocking the differences between Prot-estants and Catholics, were written today, the scenario could read like this: There was once a great religion that taught that salvation came only from faith that 2 + 2 = 5. One day many revolted, claiming that salvation came only from faith that 2 + 2 = 4. After a long, bitter, and at times bloody divide separated the original church (the Fivers) from the reformers (the Fourers), both realized that their common political aspirations could never be achieved as long as they remained at each other's throat. Thus, after years of interfaith dialogue by their best mathematicians, who employed all sorts of complicated algebraic calculations, both the Fivers and the Fourers finally agreed that indeed salvation did come only from faith that 2 + 2 = 4. They just had a different understanding of what 4 meant (the Fivers believing that 4 really meant 5). After great pomp and accolades of brotherly love, declarations of unity were signed proclaiming salvation by faith in 2 + 2 = 4. Who cared that each had a different understanding of what 4 meant? The important point was that both professed 2 + 2 = 4. 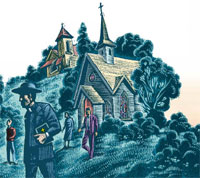 However absurd it might seem in the current religio-political climate in America, Catholics and Protestants, seeking political power, are claiming unity on, of all things, justification by faith, the doctrine that not only caused the Protestant Reformation but also remained at the heart of the split between the two major branches of Western Christianity. After the signing of Evangelicals and Catholics Together (ECT 1), The Gift of Salvation (ECT 2), and most recently The Joint Declaration on the Doctrine of Justification, the claim is made that the division between Catholics and Protestants on this crucial doctrine is basically over, and now they have great prospects for unity.

"The agreement," said the Washington Post regarding the Lutheran-Catholic accord, "is significant beyond the dispute over doctrine it resolves. It has deep implications for future relations among Catholics and Protestants, said theologians and church leaders. Many said that the accord gives added promise to the ideal their denominations champion–of full communion, or merger, between the churches."

Have Protestants and Catholics found a common understanding of justification by faith? If not, why do they claim that they have? And, finally, what implications could this newfound unity have for religious freedom?

However divergent Catholic and Protestant theology on numerous issues, the crucial split has always pivoted along one particular point known as "justification by faith." Since the Reformation, Protestants have insisted that justification by faith is an act by which God declares repentant sinners as righteous. Using verses such as "Therefore we conclude that a man is justified by faith without the deeds of the law" (Romans 3:28) and "Therefore by the deeds of the law there shall no flesh be justified in his sight" (Romans 3:20), the Reformers taught that justification is something that God does for the sinner, not in the sinner, a crucial distinction. By the Lord's gracious act repentant sinners have the perfect righteousness of Jesus—the righteousness wrought by His sinless life and absolute obedience to God's law—credited (or imputed) to them, as if that sinlessness and absolute obedience were now their own. Christ's history, Christ's obedience, and Christ's righteousness become, legally, their history, their obedience, and their righteousness, and these provide the only means by which sinners can be accepted by a holy, perfect God.

However, the good news doesn't end here. According to the most generic Protestant theology, this legal declaration of righteousness comes—by faith alone. It can't be by works, because people are already sinners, and thus no matter how obedient and law-abiding, they can never achieve the perfect righteousness that a perfect God demands. Nothing that happens in a person gives that person merit that can, in any way, justify them in God's sight. They are saved only by what God has done for them through Jesus Christ, and that salvation comes only by faith alone in what Christ had done for them. 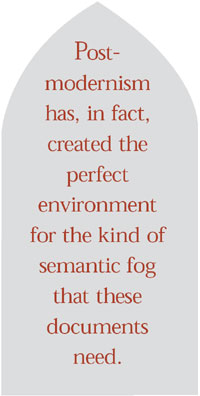 Catholics subsume under the name of justification, which includes not just what God does for the sinner but what He also does in him, an absolutely crucial distinction. According to the Catechism of the Catholic Church, "justification includes the remission of sins, sanctification, and the renewal of the inner man". Justification, therefore, is what happens inside a person as well as outside. Christ's merits, the merits that He wrought out in His perfect life by His perfect obedience to the law, are not just credited to a person but are actually infused into the life of the believer through the sacraments administered by the Roman Catholic Church itself. Rome teaches that this saving merit doesn't remain outside of the sinner, but becomes something that happens inside a person, a change that gives that person merit before God.

"The merits of man before God in the Christian life," says the Catechism of the Catholic Church, "arises from the fact that God has freely chosen to associate man with the work of his grace . . . so that the merit of good works is to be attributed in the first place to the grace of God then to the faithful." Rome's idea that God somehow associates man "with the work of his grace" leads it to an understanding of justification that Protestantism has rejected for more than 400 hundred years.

Of course it does, which is why at the Council of Trent (still viewed as authoritative), Rome denounced justification by faith alone: "If anyone says that the sinner is justified by faith alone, meaning that nothing else is required to cooperate in order to obtain the grace of justification . . . let him be anathema"—a denunciation that, after more than 450 years, the church has never repudiated. In fact, the Council of Trent declared that "if anyone says that justifying grace is nothing else than confidence [faith] in divine mercy, which remits sins for Christ's sake, or that it is this confidence [faith] alone that justifies us, let him be anathema." If, however, Protestants are correct in their understanding of the gospel, and if "justifying grace" is, in fact, nothing else than faith "in divine mercy," which does, indeed, remit sin "for Christ's sake," and if this faith alone is, truly, what "justifies us," then Rome has cursed the gospel, a slight theological technicality that the Protestant movers and shakers of this newfound unity with the Catholic Church have conveniently overlooked.

Here's the problem: one group says that justification is only what happens outside of us; the other says that justification happens outside and inside us. It can be one, or the other, maybe neither—but certainly not both. This issue allows for no middle ground, no mediating compromise, no golden mean—because none exists; and to assume not only that one does but that it can be extracted through cordial, loving, and open dialogue is like saying that cordial, loving, and open dialogue will lead to a compromise position between those who say that George Washington was the first president of the United States and those who deny it.

If, however, such a fundamental difference between Catholics and Protestants on justification by faith exists, how can they claim unity on it? The answer is simple: they agree on words, not meanings. By exploiting the cloudiness of language, by abusing the ambidextrousness of syntax, the signers of Evangelicals and Catholics Together, The Gift of Salvation, and The Joint Declaration on the Doctrine of Justification were able to affix their names to strings of words ("salvation by faith," "grace," "justification by faith," etc.) that—though sounding alike, reading alike, and looking alike—were, in fact, as different in meaning as 4 and 5.

Evangelical scholar R. C. Sproul, in a book attacking ECT 1, revealed just how far these people have abused language in order to sign a document with claims as ludicrous as 2 + 2 = 5. Sproul wrote: "In private conversation Colson indicated that the two sides of the dialogue do not always agree on the meaning of statements in ECT. This is certainly true with respect to the joint affirmation on justification. When, for example, Rome declares that justification is because of Christ, this means something radically different from what it means to historic Evangelicalism."

What's going on? Conservative Protestants, once Rome's most implacable foe, now claim unity with the papacy, not just over issues such as abortion, prayer in school, or pornography—but over justification by faith, the very issue that has divided them for centuries? Twice in the 1990s conservative Protestants in the United States signed documents claiming that Roman Catholics and Protestants agree on the essential elements of the gospel, of salvation by faith alone. And, astonishingly, the Lutheran World Federation and Roman Catholics in 1999 signed The Joint Declaration on the Doctrine of Justification in Augsburg, Germany, claiming "a consensus on basic truths of the doctrine of justification," which "shows that the remaining differences in its explication are no longer the occasion for doctrinal condemnations" and therefore "the reasons for the rift in the 16th century are no longer applicable for the present moment."

Why are Protestants so eager to claim that Rome has a biblical understanding of salvation by faith alone, when it's obvious that Rome's doctrine of salvation contradicts the core of Protestant theology? To begin with, the good folk involved in these documents live in the postmodern era, a time when Truth, as with a capital T, is deemed nonexistent. Instead, there are only "truths" (as with a small t), opinions that each community bands together and creates for itself according to its own specific needs. There's no overarching metanarrative from which people or individuals derive a history or sense of identity. No one can find the Archimedean point upon which one can see absolute truth, because that point is a fictional place, like Utopia, Atlantis, and Lilliput. There is no absolute, only individual perspectives heavily influenced by culture, heredity, and upbringing. Postmodernism, ultimately, leads to a cold (and potentially dangerous) pragmatism: "truth" is what "works," nothing more, because, given postmodernist presuppositions, what else is there?

The second and, perhaps, most important factor, especially in the American context (with documents such as Evangelicals and Catholics Together and The Gift of Salvation), is the political one. If not for the Christian Right and the political rebirth of Evangelicals in the past 25-30 years, these bogus agreements would never have been written because there would have been no need for them. Once, however, the Christian Right—composed primarily of Protestant Evangelicals (historically, those vehemently opposed to Rome)—started to flex its muscles, only to get belted back harder than it itself could belt, the movement realized that it needed the clout and numbers of politically conservative Roman Catholics if it was to succeed. The only problem was that for more than 400 years Protestants—particularly these kind of Protestants—had been bitter enemies of Catholics. And, more than anything else, what kept them apart was their opposite understanding of justification by faith (and all that it entails). Thus, whatever hopes for political unity these people harbored, nothing substantial could happen until this, the most divisive of issues, was dealt with.