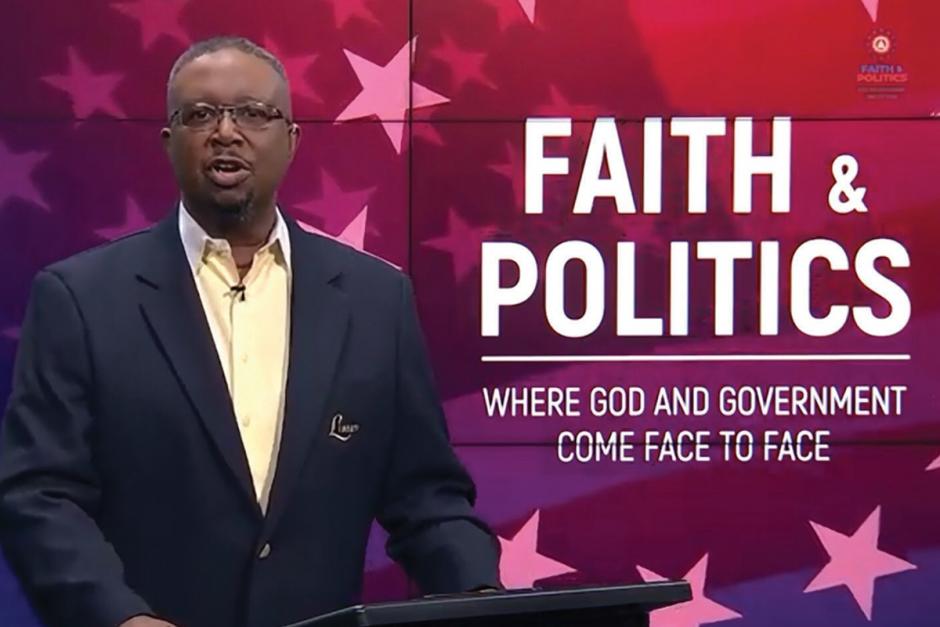 Where Angels Fear to Tread

What happens when you bring two polarizing topics together in one half-hour television program? You get a fast-moving, thought-provoking, and sometimes confronting discussion of current events called Faith & Politics.

The host of this new program is Orlan Johnson, an attorney with two decades of experience in local, state, and national politics, who currently serves as director of Public Affairs and Religious Liberty for the Seventh-day Adventist Church in North America. Prior to this, Johnson capped a successful legal career in Washington, D.C. with a stint as chair of the Securities Investor Protection Corporation​—​a role to which he was appointed by President Obama and confirmed by the U.S. Senate.

Liberty editor Bettina Krause recently sat down with Johnson to discuss politics, faith, and the disappearing art of civil discourse.

Orlan: There’s just so much confusion around both these issues in our society today. People are blurring the lines. They’re mixing up their political views with their religious convictions. It has progressed far beyond the idea of faith simply informing our public policy positions. Many people are literally confusing their biblical beliefs with their political worldview.

So, we looked around and we realized there really wasn’t a television program out there that specifically addressed this challenge.

Bettina: We’re having this conversation not too long after the U.S. midterm elections. As a person of faith, how do you relate to some of the extremes of political—and religious—rhetoric and posturing that we’re seeing?

Orlan: It’s clear that some people will use their faith as an excuse to do or say certain things in ways that can be harsh and unconstructive. We talk about “calling sin by its rightful name,” but some believe this is a license to speak on certain political issues in ways that don’t serve either our public discourse or, for that matter, the reputation of religion.

But the reality is, there’s no one monolithic “religious voice” in our politics today. I was looking at some interesting data the other day: about 70 percent of Church of Jesus Christ of Latter-day Saints members vote Republican. Yet, on the other end of the political spectrum you see about 90 percent of the African Methodist Episcopal Church members vote Democrat. And I was surprised to see that for Jehovah’s Witnesses, about 80 percent of members vote independent. For members of my own faith, the Seventh-day Adventist Church, the split is probably close to about 43 percent Democrat, 35 percent Republican, and then the rest is “other.”

If you asked the average person, they’d probably tell you, “Religious people are going to be, on average, a lot more right-wing. But then you look at the data, and you realize it’s not quite so straightforward. So, this is also an important part of what we’re doing with Faith & Politics—we’re talking about public policy, but we’re bringing different religious viewpoints to the table.

Bettina: It seems that religious-identity politicking is alive and well in America. Religion seems to get pulled in at times and used for partisan political ends. Do you think this dynamic is here to stay in American politics?

Orlan: I do. And I think we’ll start to increasingly see the left trying to shape many of its policies with religion in mind, as well. Clearly, religion has been and will continue to be an important force on the right, but we’re now seeing the left trying to figure out how to bring faith into the equation when it comes to shaping its political platform. Take, for instance, the recent Supreme Court decision in Dobbs. The left has traditionally framed the abortion issue a certain way, but now they’re also trying to talk about it from a religious perspective. We’ll see more of that, I believe, going forward.

There are other changes coming, too. In the November 8 election, we saw the first Gen Z individual elected to Congress—a 25-year-old. It will be interesting, as this new generation comes in, to see what happens in the name of religion. According to current data, this generation is more loosely connected to institutional religion than any other generation before. So, how will that reality shape our public conversations around the role of faith in politics going forward? I think it’s a toss-up.

Bettina: What values—or positives—do you think faith can bring to the discussion of politics?

Orlan: We’re told that if we want peace, there’s two topics we should never discuss in the same conversation: religion and politics. But I believe faith can actually bring a more civil political discourse into play. It doesn’t always, but it can.

Regardless of our religious tradition, if we’re a person of faith, we should bring to the table a willingness to accept others who have different perspectives. We should be able to have difficult conversations that don’t turn into explosions. We should be able to get comfortable with the idea that there will always be some people to the right of us, and some people to the left.

It boils down to this: If my faith teaches me that I must always treat others with respect, then I can’t choose to put that aside when I’m dealing with somebody whose political view is different than mine.

In Scripture, we see Jesus relating to individuals as individuals—meeting people where they were. He also walked a path that satisfied neither the liberal nor the conservative religious leaders of His time. Both sides were equally uncomfortable with him! At the same time, He was focused on looking out for those who were being denigrated—the vulnerable in society.

And that’s key. If we can exhibit love even in the midst of hate, that changes everything. Love will always beat hate.

Orlan: It was. I found politics fascinating because I couldn’t understand how people could get other people to vote for them. And there are paradoxes involved, too. On one hand, you have to be a humble person, willing to serve. But on the other hand, you need to be comfortable seeing life-sized billboards of yourself everywhere you go. How do you reconcile those two things?

When I was 18 years old, I went to study at Andrews University, in Berrien Springs, Michigan. I’d just spent a year in France, and when I came back to the United States my father told me, “You’ve got three years to get your degree. Figure out how to make that happen.” And this drove me to be an economics major, because that was the only degree I could finish in three years. It also drove me to look for ways to get school credit for doing things other than being in class.

So, I got a job working for the then-Congressman David Stockman in the fourth district of Michigan. Every semester I was at Andrew’s, I got three credit hours and a grade for working in the congressman’s office. Later, I went from Stockman’s office to Congressman Mark Siljander’s office. I used to attend the Republican conventions at Mackinac Island and even worked in the Congressman’s Washington, D.C. office for a while.

Through the years I’ve worked for both Republicans and Democrats. And to me—and I know most people don’t want to hear this—I don’t see much difference, from merely a job perspective. In essence, politicians are all trying to figure out how to get reelected and how to find the right message to make that happen.

Later, as a lawyer, someone I worked for who was involved in local politics told me, “Orlan, if you want to be a good lawyer, you need to know every politician in your local area. They can potentially take 10 years off almost any transaction with the stroke of a pen.” So, initially, that was why I found myself connecting with the political establishment—it was a good way to build my legal practice. I’ve never wanted to run for office, but I’ve always wanted to know other people who ran for office.

Orlan: I was. I helped out in local and state politics for many years, and eventually I ended up working on Obama’s national campaign. It was something I’d never done before; I got pulled into that completely by accident.

Early on, I did a fundraiser for Obama in Washington, D.C. along with a number of other people, and the Washington Post wrote an article that said, “Orlan Johnson raised a half million dollars for Obama.” People began calling me from all over the world asking me about it. And I kept saying, “No, it wasn’t just me!” But the press and the articles just took on a life of their own, and the next thing I knew I’d been asked to be on Obama’s National Finance Committee. I was flying all over the country with this guy, who—at the time—I thought would be an interesting vice-presidential candidate. No one really thought Obama could win the presidential nomination.

Bettina: You’ve had a front row seat in many different political contexts. As a person of faith, do you still believe in the ability of politics to change the world for the better?

Orlan: I do. And more than that, I trust the American people to eventually do the right thing—to get it right politically.

Obama was about as different as he could be to his predecessor, George Bush. And Donald Trump was as different again to Barack Obama. So, yes, we’re a country that swings on a political pendulum, and sometimes we swing hard in either direction.

But regardless of the way the pendulum has swung in recent years, I still believe in the ability of the American people to adjust and to bring us back from the extremes. And in that process, I believe the voices of people of faith can make a difference. That’s where I hope Faith & Politics can help—by bringing people together to discuss challenging topics in ways that show the power of faith to improve our political discourse.