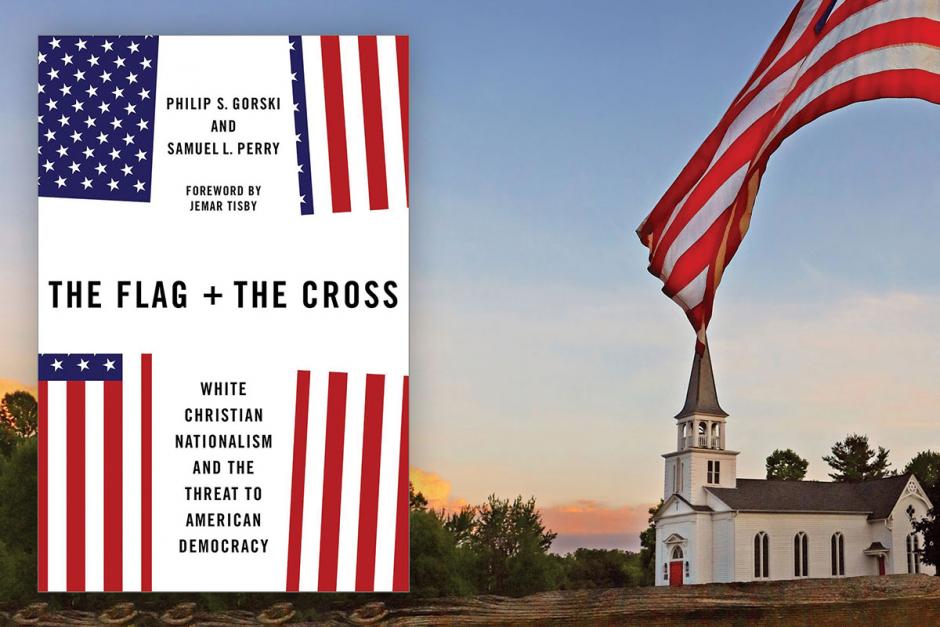 Why Our Story Matters:  Interview with Philip Gorski

What is the story of our nation? How did it begin, and what is its destiny? What values define what it means to be American? And does it matter how we answer those questions?

In their recently released book, The Flag and the Cross: White Christian Nationalism and the Threat to American Democracy (Oxford University Press: April 1, 2022), Philip Gorski and Samuel Perry explore what they call a “deep story” that today wields immense power within American culture and politics. It’s a story that says America is a specially favored nation—one with a God-given purpose. It’s a story that says America is for “us” and not for outsiders— socialists, Muslims, atheists, secular folk, or anyone else who doesn’t share in the common heritage of Christian America.

Both Gorski and Perry are nationally known authors and sociologists of religion. Together they’ve produced a succinct, readable, and profoundly important book about the phenomenon known as White Christian nationalism.

Bettina Krause, editor of Liberty magazine, recently spoke with Professor Gorski, chair of the Department of Sociology at Yale University, about what drives this particular understanding of American identity.

Bettina Krause: As someone who has researched and written so much through the years about religion in America, were you surprised by what happened at the Capitol on January 6 last year, and the prominence of Christian symbols and language?

Philip Gorski: I was horrified, but I wasn’t surprised by the events of January 6. Both Sam Perry and I were already well along with this book by then. I actually started writing about religious nationalism almost 20 years ago, back when only scholars were interested in talking about it.

Sam and I had warned many people there would be violence during the period between Election Day and Inauguration Day, especially if Trump lost. So we weren’t surprised by what took place.

But the events of that day did suddenly make many people, who were outside that subculture, suddenly aware of this thing called Christian nationalism, which had been completely invisible to them before. For many conservative White Christians, it was also a bit of a wake-up call when they saw what was being done in their name.

Krause: What makes someone a “White Christian nationalist”?

Gorski: There probably aren’t that many people out there who would say, “Yes, I’m a White Christian nationalist.” Who would want to adopt that label for themselves?

But what we’re talking about is a way of seeing the world and a way of understanding our place within the world—a way that many conservative, White, native-born Christians in America embrace to one degree or another. They see themselves and America in terms of a deep story, which runs something like this: America was founded as a Christian nation (by White Christians). It’s based on biblical principles (Protestant principles). The United States is powerful and prosperous because it’s a chosen nation or a blessed nation. Today that power and prosperity are threatened—by immigrants, by non-Christians, by people who somehow don’t belong, by internal enemies who are in some way violating America’s moral code.

That is the deep story. And so you might say, Well, OK, sure, that’s interesting, but is there really anything biblical or Christian about this story? And that’s a theological question I don’t really feel prepared to answer, but I can say that this story does draw on a certain understanding of Christian Scripture.

Krause: So “Christian” in the context of White Christian nationalism isn’t necessarily talking about the Christian faith, as such? But it is equating Christianity to a particular social identity?

Gorski: Well, the way I would put it is this: all expressions of Christianity are always going to be entangled with a particular cultural context, right? That’s inevitable. But the important question is, What is the dominant part of that  Christianity? And do people recognize the tension between the two?

White Christian nationalism is a form of cultural captivity. That is, where Christianity has been captured by culture to the extent that people don’t perceive the difference, or the tension, between the two anymore.

Perhaps what’s distinctive about the United States, and what has made it more vulnerable to Christian nationalism, is that so many forms of contemporary Christianity are nondenominational. They’re not embedded within a particular theological tradition. Rather, they’re often organized around a single charismatic leader who’s the final arbiter on orthodoxy, so there’s often no one who can step in and say, “This isn’t historic Christianity anymore.”

For example, I’m originally from Wheaton, Illinois, which as we know is the home of Wheaton College, one of the most prestigious evangelical liberal arts colleges in the country. In early 2021 the faculty there issued a very clear statement distancing themselves from all forms of Christian nationalism and White supremacism. But they have no authority over, say, a megachurch in Atlanta or Charleston. Certainly not in the same way as a Catholic bishop in France or an Anglican Church leader in England, who could simply say, “That is not a true expression of historic faith.”

And so, this reality makes it easier in the United States for the cultural capture of Christianity to take place.

Krause: In your book you discuss the impact of changing demographics—America is becoming less White and less Christian. How does this reality play into White Christian nationalism?

Gorski: This feels very threatening to a lot of people, and it’s a reason many conservative White Christians in the United States have a sense of being persecuted or oppressed. Of course, this is clearly not what’s happening when you compare it with the persecution of Christians in the Middle East or North Africa, or parts of Asia!

But what they’re expressing, first and foremost, is a sense of vanishing cultural influence. They sense, also, that political control may slip from their grasp soon if they don’t do something to protect it. This has pushed some toward positions that are increasingly at odds with full-fledged democracy. It’s one of the reasons there are high levels of support for measures restricting voting, for instance, or for institutions such as the electoral college system, which tend to filter out the will of the majority. Counter-majoritarian institutions, as the political scientists call them.

Krause: I’m curious about how Christianity and religion in general can positively impact American civic life. You wrote a book some years back, American Covenant, talking about “civil religion” and how religious themes and ideas are sometimes able to build consensus or solidarity within a pluralistic society. But how do you square that with what we’re talking about today? How do we find the balance?

Gorski: I think it’s very tricky. I wrote a third book in between American Covenant and The Flag and the Cross called American Babylon. The subtitle was: Christianity and Democracy Before and After Trump. One of the arguments that I made there was that Christianity and democracy have always had an ambivalent relationship.

If you look for it, you can see ways in which Christianity prefigures what we understand by democracy, or shapes what we understand by democracy. Just one example: the development of the idea of fundamental human equality is historically linked to the idea that all human beings are created in the image of God. This allows for the idea of representation, right? The idea that a group of people can send a representative to a body that will make decisions.

And there are many other ways in which you can see democracy being prefigured by Christianity. But we need to also remember that, for most of its history, Christianity and Christians made peace with hierarchical, inegalitarian, unrepresentative, and authoritative institutions.

Your point, though, is one of the challenges we have today. How can we find a way to maintain democratic solidarity in societies that are deeply pluralistic? That’s not easy. To find a common story and common inspiration. Especially when today the stories of Christianity are no longer familiar to many American citizens—which is something I find in my own teaching.

Krause: Your book touches on various illiberal trends that are taking hold in other countries—Hungary, Poland, Russia, India, and so on—where populism becomes allied with religion and supports a more authoritarian style of government. And then you asked a question: Could it happen here? It’s a question that, a few years ago, would have sounded ludicrous. But is it? Could something like that happen here?

Gorski: Absolutely. I don’t have a doubt in my mind that it could happen here, and I think the next five or eight years will be a crucial watershed moment. I will say, though, that I feel slightly more optimistic now than I did a few months ago. And ironically, and sadly, it is in part because of the Russian invasion of Ukraine. This has been a bit of a shock to many Americans, who are seeing what actual tyranny looks like. That tyranny isn’t something such as being inconvenienced by wearing a mask or being asked to get vaccinated; the reality of tyranny is much more ferocious than that.

Krause: What are the differences, in your mind, between patriotism and a Christian nationalistic worldview? How can we express pride in both our nation and our faith in ways that don’t feed into unhealthy narratives?

Gorski: It’s important to say that you can be a patriot without being a Christian nationalist. I personally draw a sharp distinction between nationalism and patriotism. Nationalism, for me, is above all about “blood, soil, and power.” It’s about our country being great in the world, it’s about controlling groups that are not like us, whether that’s inside or outside our borders.

But patriotism means pride in a particular set of political institutions or in a shared way of life. The blood, soil, and power kind of nationalism displays hostility toward outsiders and toward those who are perceived, internally, as enemies.

Whereas patriotism is potentially open and embracing of all those who support a shared way of life and particular set of values. In the context of the United States, that means supporting constitutional law and collective self-government. It also means, today, being committed to a multiracial culture and a multiracial form of democracy. This patriotism is welcoming to the stranger and affirms the equality of all people.

White Christian nationalism is opposed to precisely all those things.

Krause: Your book relies heavily on research and on national survey data you collected, but I’m mindful that simply presenting facts doesn’t necessarily change hearts and minds. Do you have any sense of what it could take to reach those who may have unknowingly taken on elements of a White Christian nationalist worldview?

Gorski: There’s work that people need to do within their own communities—within their own faith groups and their own personal networks. As you say, we can put up all the charts and graphs, and cite all the books and articles we want. But unless this message is coming from somebody you trust—and there’s a lot of people out there who don’t trust a Yale sociologist, and I totally understand that—it’s just not going to get through.

There are already many serious and difficult conversations going on around the country right now. Sometimes those discussions just end in division, but I think sometimes they do lead to reflection and rethinking, and that’s what we have to hope for right now.

But for this message to really have any meaningful effect, it has to be delivered by Christians to Christians, within Christian communities.