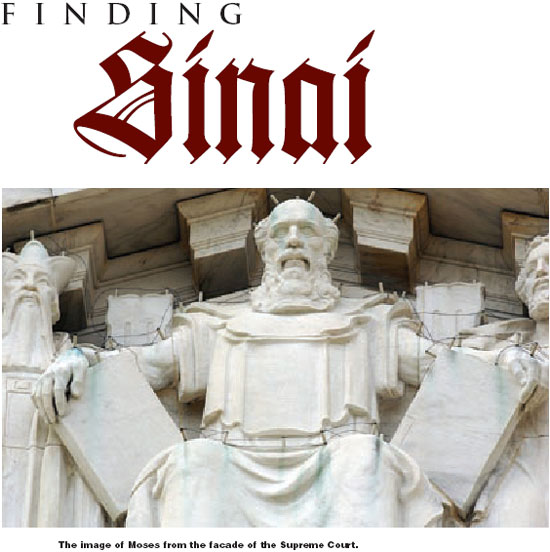 According to the narrative in Exodus, Moses came down from Mount Sinai with two tablets of stone engraved by the finger of God Himself. The words on the stone were a visualization of the words that God had previously thundered out to the multitude gathered at the base of the mountain.

However, when Moses came down to that same once-awestruck constituency, he found them dancing around the symbols of idolatry that they had so recently used in Egypt. In frustration-anger-Moses smashed the stones on the ground.

Later God called Moses up to the mountain again and retraced the ten "words" on the new tables of stone. From there they eventually went inside the ark of the covenant between God and humanity-to dwell in priest-guarded isolation behind the inner temple veil.

Given the many golden calves that have characterized human response since, even into the Christian Era, it is probably appropriate that those tables of stone seem to have vanished without trace. They are certainly not on display. At least not the originals!

This issue of Liberty comes back to those Ten Commandments, now before our modern mixed multitude. And in some ways the issues are the same. Are we to post them before the golden calf of a secular society, or take them into the temple and allow the mechanism of religious application to activate human behavior?

So much of the Ten Command-ment debate in recent years has circled around the issue of constitutional permissibility. Much less of it has addressed whether this is an appropriate way to communicate a religious totem.

There is a rich irony that our nominally Christian society, which tolerates a constellation of immoral behavior, some of it tacitly supported by religious interests, should be so ready to post the Ten Commandments on the walls of the public bathroom. We now speak of the resurgence of moral values since the last election, but at best these are manifested through conflation of several hot button issues with the national interest. I fail to see any real corollary in national spiritual renewal. In fact, I fear that with the attendant polical demonization accompanying this new moral values model we are perilously close to fulfilling Thomas Jefferson's warning that "having banished from our land that religious intolerance under which mankind so long bled and suffered, we have yet gained little if we countenance a political intolerance as despotic, as wicked, and capable of as bitter and bloody persecutions" (First Inaugural Address).

Let me say right here that my prayer is fervently the one I have often heard from friends in conservative religious circles: "Lord, heal our nation." But is turning the sacred principles of obedience to Deity into public graffiti likely to do that? And how does that comport with the clearly private view of religious devotion enunciated by many of the Founders? In the words of Madison, "the religion then of every man must be left to the conviction and conscience of every man."

I do not believe that America's Founders expected a nation devoid of religion. On the contrary, they presumed it to be a righteous nation, because it was composed of God-fearing people. Jefferson's inaugural previously cited is replete with statements such as "enlightened by a benign religion," "acknowledging and adoring an overruling Providence," and "the happiness of man here and his greater happiness hereafter." Yet this followed a bitter election in which Jefferson stood for the principles of secularity, even to the detriment of his standing among religious interests.

Reading the history of my own church, the Seventh-day Adventist Church, I see how it has long shared the assumption that the United States of America has a special role in protecting faith-in guarding religious liberty-not chosen but blessed. In fact, prophetic symbols have always inspired this movement, and Adventists identified one of the markers of the United States they saw explained in Revelation 13 as being Protestantism. The other essential characteristic they identified as republicanism-the principle, not necessarily the party, of course.

But as is true with much of prophecy, there is a warning presented to power. Revelation 13 speaks of the development of a coercive state-demanding obedience to certain "moral" markers.

One hundred years ago Liberty magazine was begun because of two developments that Adventists saw as threatening to religious freedom and harbingers of the prophesied intolerance. There were overt legislative efforts to put the force of law behind Sunday observance, and there was a strong push to formally and structurally declare the United States to be a Christian nation.

The Christian America call was essentially a move to establish a particular vision of Christianity under the protection of the state. The Sunday law issue also troubled Adventists, who were already suffering under often restrictive blue laws.

At the time, my church was to the fore in proclaiming the Ten Commandments-often at the risk of being seen as legalistic by Protestants forgetful of the dynamic that had produced the entire Protestant phenomenon. And that Ten Commandment proclamation was sharpened in that crisis by the fact that blue laws and other Sunday legislation were not only religion by coercion, but derived from a misreading/misapplication of the fourth commandment, which clearly identifies the Sabbath as the seventh day- as practiced by Jews and early Christians. Even recently deceased Pope John Paul II in his seminal document Dies Domini (1998) acknowledged the seventh-day Sabbath and the lack of any directive from the Lord Jesus Christ to change it-settling instead for an appeal to church authority and analogy of the holy Sabbath with the hope of Resurrection Sunday.

I would be false to the concerns of one 100 years ago if I did not see in the current agitation to post the commandments everywhere the same inclination to use law to impose a particular subset of religious view on all.

Yes, there is an equal and troubling dynamic in the secularists who wish to chase religion-most particularly Christianity-into some mountain hideout, away from public view. We must not allow such antipathy to faith to limit the freedom guaranteed by the Constitution. But in an era of militant moralism, I fear the first threat more.

There is an edge to the view that the United States might be the "lamblike beast" of Revelation 13. In that book, the apostle John allows that this benign power can morph into a fearsome creature that adopts coercive methods. As in life, so in apocalyptic literature there is a dynamic that our response can effect-and I thank God that what is suggested for the future does not have to happen now. I do not want the United States or any other power to fulfill that coercive role. I believe that our response can prevent such a thing from happening now. I am not fatalistic but must remain hopeful and work to create hope.

Under threat from a cruel attack on September 11, 2001, the United States continues to amaze the world at how quickly it "changed" and went on the offensive. Religion in the United States, similarly threatened by secularism, is already showing an ability to overreact constitutionally. We must not fall for any part of the extremist dynamic of other societies under threat that have looked to religious coercion as a means of survival.

Let's put up the Ten Commandments wherever we can. Post them prominently in our homes and repeat them to our children and live them for their emulation. Let's put their principles to work in our public discourse, in our business dealings, in our relationships with other peoples and nations, and share their dynamic in our various holy places. But let's not think that the arm of the law is close enough to Sinai even to dare to presume where God did not.